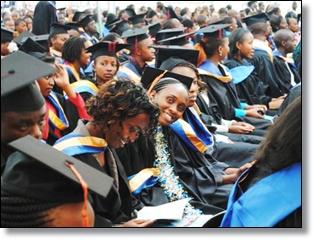 Have you ever been to a graduation ceremony in Kenya? I who claim to have done most things there are to do in Kenya had not until last week, and even then I only got as far as the main entrance to the Catholic University for Eastern Africa. Graduations from places of higher learning to those who are not directly involved are only a paragraph on the back page of the Daily Nation newspaper, describing an extra large traffic jam within a six mile radius of the place of learning in question.

Last week I had reason to go to my nearest ATM, which is situated a half-mile down the worst surfaced road in the world. Fortunately, there are normally very few vehicles on this stretch of road on which it is inadvisable to travel at more than five miles per hour. There were around 2000 students graduating from the university and each of them had invited a dozen or so family and friends to attend their graduation, say at a minimum two car loads per student. This meant that on this day, traveling down this half mile of so-called road in the direction of the university there were about 4000 cars. Add to this a conglomeration of pedestrians mixed with about 3000 passengers who had abandoned their buses to join the cheerful pedestrians who for a change were overtaking cars.

I was not surprised to see buses from every high school in the Nairobi area. Neither was I surprised to see giant coaches from as far distant as Mombasa, Kisumu and Eldoret, but I was amazed to see numerous coaches and matatus from settlements with names I had never heard before. There must have been representatives from every tribe in Kenya and the atmosphere was one of nation first, tribe second.

A carnival atmosphere was afoot. Hundred of ingenious Kikuyu salespeople offered for sale mysterious mementos for the festival – golden garlands of tinsel to wear on the graduate’s head, and masses of bouquets of budding red roses.

The ATM to which I was heading was adjacent to the entrance to the university, to which all the traffic was heading and had been since 5 am that morning. Having collected my two thousand shillings, I will leave to the imagination of the reader the difficulty of my return journey up the road down which I had come. Mine was the only vehicle travelling in the opposite direction to the four lines of oncoming traffic moving at a snail’s pace past the forty haphazardly parked giant coaches. This was as near as I got to the graduation but what started as a tedious, frustrating venture, turned out to be a veritable enlightenment.

In America I am told such graduations start from high schools and are the highlight of the American educational system. They enshrine the inalienable rights in the constitution which are arguably an endorsement of materialism, the direct opposite of Karl Marx’s dialectic materialism. Their god is money.

Both the contemporary and the old red-brick universities of the Old World as well as the medieval establishments, teach the classical philosophers, but sadly these noble foundations of learning automatically confirm the rights of the corporate capitalist minority to enslave the rest of us.

So here is the moral of my tale. At a Kenyan graduation you will find two virtues which are missing from many other graduations – hope and optimism. A new generation of well-educated, intelligent youth is emerging determined to alter the reputation for civil wars, corruption and mismanagement and hunger, which Africa has earned since Uhuru.Could it be that traditional Africa’s excellent system of the extended family and caring attitudes is about to be converted to a resource-based economy? (www.thezeitgeistmovement.com) Could it be that this recent crop of graduates are a harbinger that the slumbering giant of Africa is about to awaken?