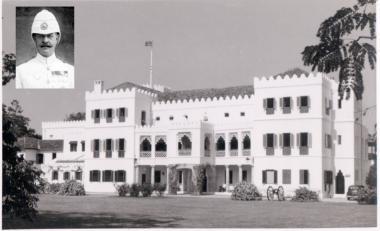 Alexander Stuart Rogers was a less than satisfactory official used by the British during their early days in East Africa. He had been born in Peshawar, India (now Pakistan), on 13 November 1862, to a family which originated in Bath. When he grew up he joined the Punjabi Native Police, and it was with 200 of his policemen that he was lent to the Imperial British East Africa Company to join troops in Mombasa, in August 1890. The Company was having trouble in Witu, recently ceded to Britain by the Germans, despite the protests of the local inhabitants, so Rogers and 150 men were sent north along the coast in October of that year. He successfully took control from rebels of the fort at Golbanti a couple of months later, and he was left in charge of Witu. But the IBEA withdrew from Witu in 1893 and Rogers transferred to Lamu, where he became British vice-consul when the British Government took control of East Africa from IBEA in 1895. He was appointed Collector of Lamu and Witu.

Many complaints were received in Zanzibar about Rogers’s administration, including one from a Parsi clerk who said Rogers forced him to help put the body of a slave girl in a boat and dump it in the harbour. Judge Francis Collinson was sent to investigate at the end of 1899 and found many instances of maladministration. Among them was the accusation that Rogers failed to supervise the punishments he authorised, and in one case it was thought that a man sentenced to fifty lashes probably had three times as many before he died. The Judge reported that Rogers ‘has used his authority on certain occasions in a very arbitrary and unjustifiable manner while on others he has shown a certain culpable negligence’. (PRO, Collinson Report, FO2). But it was decided that it would be a loss of face for the administration if Rogers were removed from Witu at once. He ended up being censured and staying another year before an excuse was found to transfer him to Zanzibar. ‘He is harsh, not to say brutal, with natives,’ said Commissioner Eliot.

Surprisingly, Rogers was then appointed first Minister to the Sultan of Zanzibar, Hamed bin Mohammed, in February 1902. As the Sultan was a minor, Rogers became Regent until the lad reached his majority in June 1895. Apparently Rogers ‘became gradually imbued with an exaggerated sense of the importance of his position…which… induced him to prefer his own personal interests to those of the Sultan or of the State.’ He pulled down 120 African huts and spent a lakh (100,000) of rupees to make himself a magnificent residence. The opening photo for this blog shows Rogers and the huge residence he built.

The Sultan complained to London. Rogers became inattentive to his duties, wrote official letters and telegrams without keeping any copy, and mislaid those he received. He failed to keep appointments and neglected to answer letters. He threw people into prison without a warrant. Then he gave orders for all those found unoccupied in Zanzibar to be arrested and sent to the neighbouring island of Pemba for clove-picking. He raised the salary of his own post. He bought a piano and camera and charged them to government funds and made unauthorised grants to the Sultan.

‘But what made it practically impossible for Mr Rogers to continue to hold his responsible position…was not so much his official shortcomings as his personal habits,’ said Basil Cave, British Consul-General at Zanzibar (FO367/20). Rogers’s alcoholism caused him to neglect his duties, to make promises that he forgot by the next day and forgot about the people he had thrown into prison. He gambled and was in debt to £1000.

Rogers was ‘got rid of’ with a pension and he sailed for England in 1905. There he married Mary Spackman in 1907. In the 1911 census we find him in Reedham, Norfolk, described as a ‘retired consular official.’ He and his wife had a son, Gordon Alex Hugh, in 1908. Rogers died in Carshalton, Surrey, on 15 July 1930, leaving an estate of £44.18.10.
Christine Nicholls and Stephen North