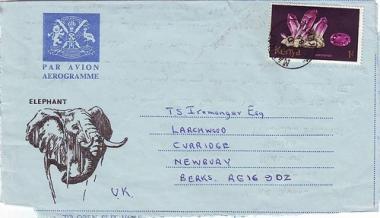 When my wife and I turned up in Kenya in the mid-1950s overland from the UK, it had been arranged that our best friend and his wife also from the UK should follow us out. My best friend duly arrived but without his wife. An annulment was arranged and he soon became engaged to an expat teacher at the Kenya High School by the name of Jill and I found myself best man to my best friend the second time that year!It turned out that Jill left behind in the UK an elderly, widowed mother, of whom she was very fond. Her mother was of a determined independent nature and had scornfully rejected life in a care home and found herself a bed-sitter in the Lanes of Brighton. She insisted on communicating with her daughter as frequently and as economically as was possible.

Every Sunday afternoon my friend drove his wife from Karen where he worked at the Duke of York School to the spacious and empty old Nairobi Post Office car park. They would then make sure the Kenya Post Office delivery van had arrived from Nairobi Embakasi Airport after having collected the mailbag off the East African Airways from London flight which landed at 14.30 hrs. Sure enough every week by 4 pm local time there would be a letter to Jill from her mother in their Nairobi post box. Sunday evening would find Jill answering the letter and the reply was airmailed Monday morning and delivered to Brighton in the afternoon post on Wednesday, and so the cycle continued.Jill soon discovered there had recently come on to the market a single sheet of lightweight blue paper with dotted line instructions and gummed strip flap which could be folded and sealed in such a way that the recipients name could be written on the front of the sheet, leaving one and a half sheets of blank paper for writing on. When folded and sealed, it ended up the shape of a traditional letter in a traditional envelope, but having no envelope it only weighed half as much. Stamps were then affixed and would thus cost half the price. These aerogrammes had one shortcoming to the inexperienced recipient. Unless he or she was particularly careful about opening it by inserting a sharp narrow letter opener at the correct corner, it often happened that the recipient would find themselves with a letter half written on one side and the remainder on a separate second disconnected page, and upside down!

All went well for my friends for seven years. Then Jill opened the post office box one Sunday afternoon and found it empty. Jill’ s mother not being on the phone and mobiles not having been invented, a frantic telegram was dispatched only to be returned 48 hours later, with the comment on the envelope, UNDELIVERABLE – Return to Sender.It was at this stage that the lack of communications, which were to revolutionise the following half century, were sorely missed. How to communicate? Fortunately Jill had a brainwave. She eagerly sorted through the Christmas cards, which they had kept from the previous Christmas, and were relieved to find that a distant cousin had enclosed in his card one of those occasionally boring, highlights of the year. It was written on his company’s letter-headed paper and his phone number was included. Jill had only seen him once before in her life, when they had both been small children at a fireworks party but the cousin turned out to be a gem. His haulage business was based where he lived in South London. He had an associate who lived in Hove and he returned Jill’s call on the same day. It turned out that her mother had in fact died peacefully in her sleep, five days previously.

Two evenings waiting at Nairobi airport from seven till midnight ensured a standby seat for Jill to London on the VC 10 and a week later she had returned to Nairobi having buried her mother in Hove cemetery.This story spotlights the communications revolution that has transpired in the 57 intervening years. Today, had Jill been in Nairobi, and her mother in Brighton, they could have seen and talked to each other through Skype everyday, if they so wished.

Jill is now a grandmother in South Africa and when I told her last month that broadband had reached Nairobi and would be in Karen within a week, her reply was, “What a shame that Skype had not been invented in time for mum and me to chat.”And now that Skype and mobile phones and other technological advances have made communication so much easier and quicker, the light blue aerogramme has been all but forgotten.