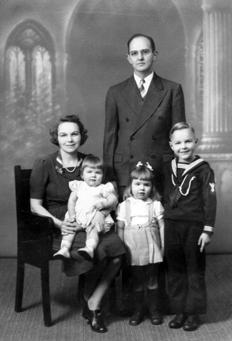 The world was at war in 1942, the year I was born. Allied forces were fighting to suppress a dominating dictator and to defend America against foreign forces. During this time of turbulence, I, Betty Elaine, was born to a young preacher’s family, joining my older brother Calvin in Middeboro, Massachussetts. Rev. George ‘Hap’ Oliver Donner and his dear wife Elizabeth Helen (Brown) Donner were high school sweethearts with a vision to serve God for their lifetime on the continent of Africa.

My father was the son of a prestigious bank president, and my mom was a humble farmer’s daughter. Back in the 1930s before ‘Hap’ and Betty Donner were married, they applied to the Africa Inland Mission and were accepted as candidates to go to Africa as missionaries. On July 1, 1938, they were married and started their deputation, support raising and other preparations. They pastored a church in Harmony, Maine. After two years, AIM told them to move back to Massachusetts, where they were better known, to have their needs met by loving family and friends.

Shortly after making this move, World War II broke out and with the sinking of the ZamZam  (a ship carrying many missionaries, who were rescued) the mission advised them to remain stateside until the war was over.

A third child, Marlowe, was born while my dad was pastoring in Dracut, near Lowell, Massachusetts, yet the Donners’ vision for mission service in East Africa never vanished.

Finally in September 1945 the war was over. AIM told the Donners they could now go to Africa. Paperwork, ordination, medical forms and countless shots and support were required before they could depart. Even though I was only three years old I still remember the shots. Even when we boarded the ship medical people punctured us with various inoculations in our arms and bottoms.

Finally after all the requirements were met, our home church, Central Baptist Church in Middleboro, Massachusetts, had a very emotional farewell service for our family of five. Friends and family members gathered to celebrate our long awaited voyage to Tanganyika, Territory.

After an eight-year wait, in January 1946 the Donner ‘party’ left from Pier 7 on the New Jersey side of New York Harbor aboard a freighter called the Gripsholm. We were bound for Africa, unknown and far from home! We waved our good-byes to loved ones – not knowing if we would see each other again on this earth! My parents answered God’s call on their lives – a calling and a commitment to follow Christ where he leads.  We set sail for regions remote and still unreached. Accommodations were tight, but adequate for the long voyage ahead. The Donner family encountered stormy seas and wild waves as we embarked on the high seas to tell the story of Jesus Christ.  Ahoy Africa!