Alone in the Desert 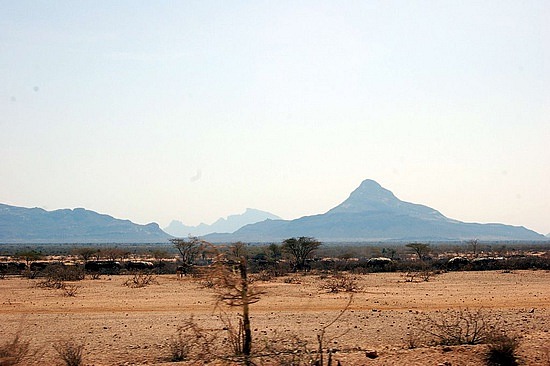 Our safari company tried out a new route from the southeastern end of Lake Turkana to Marsabit National Park through the Koroli Desert. We were halfway across the 30 mile sandy stretch of the Koroli Desert, and the driver had not seen another vehicle all morning and there was only one set of tire tracks in the sand. In the heat haze ahead he saw a typical mirage, which seemed to change from a small black stone into a black boulder. On approaching the object, it turned into an elderly American lady in a blue safari suit, sitting in the sand alone in the middle of the inhabited, scorching hot desert. She arose as our vehicle pulled up beside her and inquired most politely, without showing any sign of relief or pleasure, “Excuse me, but would you be going anywhere near Mar-say-bit.” Had we not decided to take that route, she probably wouldn’t have seen another vehicle for a week and faced a horrible death from thirst. Obviously this good lady had not the faintest idea of the danger of her situation. She was one of a group of six safari clients in a Volkswagen Combi that had stopped for a pee on their way to Marsabit Lodge. The car had accidentally driven off without her some three hours previously and nobody had missed her! We eventually got through to Nairobi from Marsabit, and told her tour company we’d picked up their guest in the desert. They sent an aeroplane up for her as there was still no sign of her VW Combi.

This appeared in the Only in Africa section of our June 2011 issue.