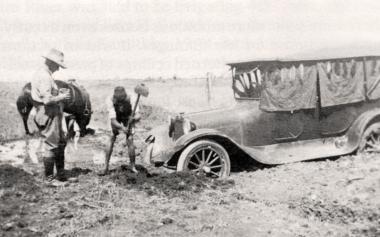 I came across a letter written by Mrs Brian Shaw, of Sotik, in the early days of white settlement in Kenya. The hardships the settlers faced were enormous. When Brian Shaw developed acute appendicitis a doctor and nurse had to come from Nakuru, while friends and neighbours rallied round. The only table in the district big enough to be an operating table was brought to the Shaw house, and car spotlights were rigged up in the bay window of the bedroom so that if the doctor arrived after dark he could operate at once. Dr Tennant from Nakuru duly arrived. He had set out wearing spats and a carnation in his buttonhole, accompanied by a nurse in spotless white. When they arrived, having had to abandon two cars stuck in the mud and finally having reached the farm in a third, they were covered in mud to the knees. It was then discovered that the anaesthetic had been forgotten, at Kericho. The district Officer volunteered to get it and went back over thirty miles of dreadful roads. The operation was performed successfully. Mrs Shaw was at the time expecting her second baby in three weeks’ time and could do no lifting. The nearest she could get for a trained nurse was a failed probationer from St Thomas’s, who turned out to be kindness itself.

It was indeed fortunate that the Shaws had a party-line telephone, common in Kenya in those days. In this case eleven houses were connected. Phone meetings could be held, when all eleven could talk to each other and relieve their loneliness. In these early days communication was difficult. In Nairobi coloured flags were flown from the roof of the Post Office to indicate the arrival at Aden of a mail boat from Europe. This showed that it was time to post mail to go back to Europe. When incoming mail arrived, a differently coloured flag indicated it was ready for collection. At night-time a similar series of coloured lights indicated the same thing.