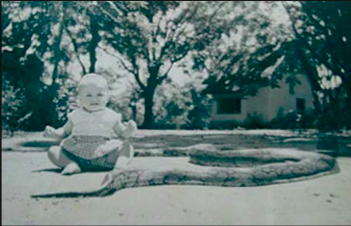 In l957, my husband Jobst was building a boarding school at the small settlement of Chimala on the Great North road between Iringa and Mbeya.   At the time we lived in Tukuyu, the Headquarters of Rungwe District and about 70 miles from Chimala over a mountainous, rather hair-raising road, which dropped down from the heights of the Poroto Mountains at over 7000 feet to the Usangu plains at around 3000 feet.   Jobst sometimes had to spend two or three days at a time at Chimala. Friends of ours, the Cormack family, ran a small hotel in Chimala, mostly catering for passing Great North road traffic. I occasionally took our baby son, Peter, and went with Jobst to stay at the hotel in Chimala.

One morning as we ate breakfast at the hotel in Chimala, a young herd boy ran in to say there was a large python on the land behind the hotel where he had been herding some of the Cormack’s livestock – mostly calves and sheep.   He had bravely speared the python and come running for help.   We abandoned our breakfast and set off to look for the python – Jobst, Roma Cormack (the daughter of the hotel owners), myself carrying Peter and the herd boy with a wheelbarrow to carry the dead python.

On reaching the place where the herd boy had speared the python, we found the spear lying on the ground, but no snake.   It had obviously shaken itself loose.   After scouting around in the fairly thick bush we found the python half way up a tree.   Jobst got hold of a stick, beat the python to the ground and then beat its head quite severely.  The python appeared to be dead, so they lifted it up and coiled it into the wheelbarrow and took it down to the hotel.   We stretched it out on hotel’s driveway to measure it and I placed Peter on the ground close beside it and we took a photograph.  Just as we had finished taking the photo, the python suddenly came to life and took off into the nearby flowerbed, much to everyone’s consternation! I hastily snatched up my precious baby while someone hurriedly fetched a panga and cut off the python’s head. On his return, Keith Cormack, the son of the house, scathingly said we should never have considered the python to be dead until it had been decapitated!