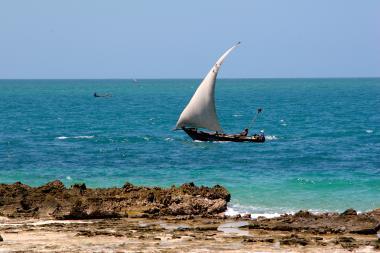 Vacations at the Indian Ocean have been part of the Arensen tradition for many years. When I was a boy my parents would take the family to the coast once a year – usually for 10 days. We used to stay in a run-down self-serve cottage that cost us $5 a day. However, we did not mind the musty old beach house because we spent most of our time in the warm waters of the ocean – riding the waves and snorkeling over the beautiful coral reefs. In those far-off days we were not aware of environmental degradation and we spent many happy hours spearing fish, collecting seashells and digging up bright pieces of coral. The coral always ended up being a disappointment since the colors faded to a dull gray when exposed to the bright sun. Until this day my favorite vacation activity is floating over a coral reef and watching the myriad forms of sea life. But now I know better than to collect. I just look and appreciate God’s wonderful creation.

Recently Barb and I had the opportunity to return to the Kenya coast. Together with Jeff and Sarah and our young granddaughters we rented a beautiful cottage on Galu beach. After several days of relaxing I decided it was time to go snorkeling. I watched the tides and chose a time when the tide was going out, leaving smooth water in the channel. I got my gear together and waded out into the shallow water. I quickly discovered that the rocky bottom was covered with sea urchins and their sharp spines made walking difficult. I finally got out into deeper water where I could float above the urchins. I snorkeled for about an hour, but all I saw was grey broken coral and sea urchins. Marine biologists say that an excess of urchins is a symbol of a ruined reef. I had to agree with them. It was a disappointing swim and eventually I gave it up and headed back to shore.

For the next two days I sat looking out over the beautiful ocean watching the play of blue colors over the reefs. I knew that all of the reefs were not yet ruined. What I needed was somebody with local knowledge to show me a live coral garden. I went for a walk south to a local Duruma village. There  I was approached by a young Duruma man who wanted to sell me some seashells. I refused his offer, but asked where I could snorkel and see reef fish and live coral. He said that he knew a spot but it was a half-mile off shore. A canoe was necessary to get there. He happened to have such a canoe. We dickered about the price of renting his canoe and came to a mutual agreement.

The next morning he showed up with a friend. His canoe was a dugout hollowed out from a large mango tree. I gathered my snorkeling gear and we pushed off into the channel. The two fishermen stood on opposite ends of the canoe and used long poles to propel the canoe forward. I sat in the middle of the canoe and relaxed – letting them do the work. Initially the channel was smooth, but as we approached the outer reef the wind picked up and the waves became rough. Watching the waves I started to get nervous and I had serious doubts as to whether I could snorkel in the surging water. I also perceived a strong current flowing under the canoe – not a good situation for a person trying to snorkel. To make it even worse I realized that if I got out of the canoe and into the water, I would not have the strength to lift myself back into the canoe.

The whole venture started to look foolhardy. When I was young and muscular not one of these issues would have bothered me in the least. But now I am older and these conditions seemed to be insurmountable. But I need not have worried. My two Duruma guides took good care of me. They kept referring to me as mzee – meaning ‘old man’ in Swahili. I knew that an mzee is revered in their Duruma culture and my comrades treated me with the appropriate care. They eventually moored the canoe on the inside of a sand bar. The water here was protected from the wind so the waves were minimal. I put on my mask and jumped into the limpid clear water where I was carried along by a gentle current. The current did not take me out to sea as I first feared, but instead took me along the inside of the reef. I found myself snorkeling effortlessly over a garden of coral surrounded by many colorful fish. One of the fishermen jumped in and swam close beside me, pointing out various things of interest. In my youth I would have resented having somebody watch over me, but now I appreciated having a companion. The other fisherman followed along in the canoe. We snorkeled for about an hour. When I indicated I wanted to stop my guide led me to a sand bar where I could stand up. The canoe pulled in beside me and I stepped easily into the boat. So there were no problems with waves, currents or getting into the canoe. I appreciated the care of the two young fishermen and accepted the fact that I have become an mzee who sometimes needs a little extra help.

On the ride home the fishermen stopped and pulled up a woven fish trap. Caught inside was a cuttlefish – a member of the squid family. The cuttlefish was gorgeous. It had the ability to change its skin color rapidly – flashing as if charged with electricity. I took it home and we ate it for supper – calamari. It was a bit rubbery for my old teeth. I wish I had left it in the sea.