Boers in Eldoret and Goan Exhibition in London 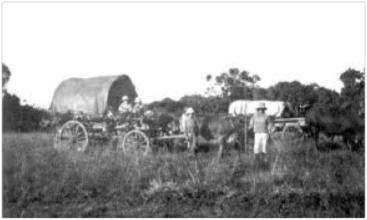 At a lunch attended by Kenyan oldies last week, talk turned to the early settlers in Eldoret. Why were there so many South African Boers there? The first to come were the Van Breda brothers, who built a grass hut on the Uasin Gishu plateau in 1903 and started to grow wheat. Then Frans Arnoldi arrived in 1905 with his family. But the first big influx was in 1908 – of 47 families, or 200-300 people. They disembarked at Mombasa, and then camped at Nakuru for many weeks while wagons were built. Soon fifty wagons were pulling up the escarpment on to the plateau. A track had to be made through forest and bamboo, until the land marked out by Von Breda was attained near Sergoit. Many of these people had few resources and lived hand-to-mouth, hiring themselves out as transport workers or ploughmen for other, richer, farmers. Since they were certainly much more skilled than British farmers at handling teams of oxen, they played a vital part in the development of cash crop farming in Kenya. Their children needed schools, but the Afrikaners disagreed amongst themselves about what language the lessons should be taught in. The government did not want to subsidise Afrikaner-speaking schools, but eventually a compromise was reached. It was more difficult to smooth over the antagonism between Afrikaner and British settlers, a legacy of the Boer War. The social and cultural rift was vast and never satisfactorily spanned. Gradually social mixing prevailed, though when I was at school in the 1940s and 50s the children still held themselves a little apart. Apparently by 1996 there were very few Afrikaners left in Kenya – only the Krugers and du Toits in Eldoret, the Prinsloos in Nakuru and the Retiefs in Malindi. There is a good book written on the subject, which explains in detail all these tensions – Brian M. Du Toit, The Boers in East Africa (Bergin & Garvey, Westport, USA, 1998)

Moving from Boers to Goans, there opened on 4 June, in the Nehru Centre, London, the first ever exhibition about the Goan contribution to life in Kenya. Mervyn Maciel writes:

‘Sylvia Carvalho, the project manager, echoed the sentiments of many Goans when she said, ‘It is despairingly lonely to look into the mirrors of history and never find reflections of yourself.’ With pictures and oral histories, the exhibition was a great success. The world renowned soprano, Patricia Rosario, and the rising star Oscar Castellino entertained guests at the opening, which was attended by Vince Cable. A full report can be found at http://bit.ly/149UgUO