Book Review: Under the Shadow of the Oath 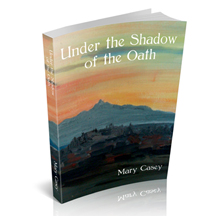 Under the Shadow of the Oath: A Selection from the African Journals of Mary Casey

Anyone familiar with Mary Casey’s writings but previously unaware of the facts of her life in Africa is likely to be surprised, as I was, by aspects of this publication. In these pages one hears of the poet learning to fire a rifle, and taking a revolver with her on a walk in the forest. It is in some ways a desperate story the journals have to tell. For Gerard and Mary Casey were farming in Kenya during the period of the Mau Mau Emergency, when sheep and cattle were slashed and killed, farms burned, and near neighbours, Europeans and Africans, murdered.

Horror and acts of cruelty are graphically described in these pages, which cover the period from August 1950 until the end of 1957. As Louis de Bruin explains in her informative Introduction, the title ‘refers to the oaths taken by those of the Kikuyu revolting against the colonial powers; a rebellion that became known as the Mau Mau Uprising or State of Emergency’. The Caseys evidently treated the Africans working for them well, but with men among them ‘who have taken blood-curdling oaths for your destruction’, their lives are in constant danger, and their work – eventually they farmed some 5,000 sheep and 2,000 head of cattle – goes on under the shadow.

We learn that the Caseys supported Col. David Stirling’s Capricorn Africa Society which opposed racial discrimination. Mary was pointedly critical of some fellow Europeans. When attending a settlers’ meeting she is disturbed by the ‘self-righteousness’, and remarks: ‘There was no hint that anything might be said for the other side, for the people in whose land we make our living, no attempt to admit our own shortcomings; or to confess our own words and actions towards these people were in some measure the cause of the present evil plight’.

The story is by no means all horror. Mary Casey was acutely sensitive to the beauty of Africa, and, like all Powyses, she loved the elements. The journals consequently contain marvellous descriptions of Kenyan landscapes and wild creatures, especially birds, and of weathers and night skies, as well as harrowing accounts of drought and flood. But when she encountered horror she looked at it unflinchingly. This looking, at horror and beauty alike, is a distinguishing feature of the journals. She observes a ‘striking bird with bright chestnut feathers and white head that runs on spidery toes upon the lily leaves’. She looks with the same clarity of vision at a scene of killed sheep: ‘A last sun ray darted into a disembowelled wether and the inside of his ribs showed a most vividly gleaming scarlet lining. … The pile of lustrous bellies and guts grows bigger. The men pause, wipe their gory fingers in the grass and take snuff. Hens with gay combs come about inquisitively, pecking at the blood clots’. The journals are rich in appreciation of both wild creatures and sheep and cattle, but completely without sentimentality. Leopards and lions and rhinos, as well as wild dogs, which are a danger to the herds, have to be hunted down and killed.

Gerard more than once remarked to me on Powys toughness. It is abundantly evident here, in Will Powys, Mary’s uncle and godfather, who farms within visiting distance of the Caseys, and in Mary herself. There are clearly times when she misses her mother and English country, and thinks longingly of her original home at Horsebridge Mill in Hampshire; for some months she is hospitalised with tuberculosis, but she is entirely without self-pity, whether for her medical state or for the emotional turbulence to which she is prone. Her control in face of inner and outer conflict is what makes her seeing so fearless.

Practical and dedicated farmers, Mary and Gerard Casey are also students. Mary translates a poem of Heine’s and passages from Homer; Gerard learns Sanskrit; he reads René Guenon and they talk about ‘the lost art of contemplation’. Mary values her Christian heritage, but in this period her attitude to life is stoic and profoundly Homeric. For her, Homer’s two great epics ‘echo the high triumph of man – music, poetry, defiance of fate and resignation to fate when all is lost’.

Mary Casey had written poems before, and she wrote a few poems – though very few – during this particular time in Africa. The great ‘release’ of her poetry was to occur in the following decade, stimulated by her romantic friendship with Valentine Ackland and influenced by her discovery of the philosophy of Plotinus, which enhanced her understanding of ‘aloneness’. Her main writing during this period in Africa was her novel (she calls it ‘story’), still unpublished, Egbert of England, and above all the journal itself. It is nevertheless, a poet’s journal, as revealed in both its reflections on poetic language and its style. The following passage is especially significant in this respect:

Yes, I am sure it was Shelley who first enchanted my ear with the magic of words, who taught me how every word has its own singular and private poetry which it repeats silently to itself until the one who makes use of it releases this inward music by assigning the word to its exact position in his stanzas. It was very likely from the Greeks that he caught this heaven-sent art.

Here, even as she speaks of the importance of positioning words she is placing her own words with poetic care for meaning and rhythm. ‘Magic of words’ and ‘inward music’ are not separate from linguistic discipline. Romantic poetic practice has its roots in ancient poetry.

In a later entry Mary Casey writes: ‘What I love best is an image, a reflection of nature in the mind that is not uninfluenced by thought, however sad or gay; winging or stagnant the thought may be, but it is the meaning of sky and forest and plain, swift deer and what engenders fear’. This is the essential process of Mary Casey’s poetry: nature in the mind, and the thinking, feeling mind in nature. It is how her imagination worked, and in consequence many passages in the journals have the quality of prose poetry. For example:

At tea-time the sky grew stormy. A vulture glided so slowly across the new greyness that covered part of the sky it seemed without motion. Then came all the rare delights of splendid fleeting sunlight, silver raindrops, the dead cedars like white-frozen fire. The dark hush when the sunlight fled. We stayed by the waterfall hearing the plash, waiting upon the overlaying forms of fern fronds, the long and delicate trailing stems of creepers with heart-shaped leaves, softly green as in England.

The first entry in this selection, 13 August 1950, simply records ‘Llewelyn’s birthday’. The dramatic, colourful cover reproduces one of Will Powys’s paintings of Mount Kenya. Will is a noble presence in these pages. Mary’s mind often turns to other members of the family as well: to the influence on her of JCP’s philosophy, and to her mother and Gertrude in particular. In herself and through other Powyses she feels the depth of family history:

Oh, but it was good to see Will, he sat for a while on the veranda enjoying the quiet and the evening sky. ‘My mother was always fond of the dusk’, he said, pronouncing the last word with a particular intonation so that I seemed to feel the quality of some long summer twilight at Montacute.

Mary Casey experiences the ultimate aloneness that is, paradoxically, a characteristicPowyses share. At one time she says: ‘Any way as John teaches, preaches and repeats over and over again every single, human being is completely alone and can only find happiness by recognizing it, and learning to find his most priceless enjoyment of life in this very inescapable and thrilling solitude’. Reading this, we may reflect that if the young Gerard Casey had not discovered a copy of A Philosophy of Solitude in Bridgend Public Library he and Mary would never have met.

Mary Casey’s inner strength, which is plain to see on every page of this selection from her African journals, is of an heroic quality. It is one she shares with Will and with Gerard. Gerard’s presence in the journals is all the more remarkable for being undemonstrative. He supports Mary in every way, and goes about his demanding and often dangerous work with quiet courage,  perhaps having to venture out after dark to set a trap for a lion, yet finding time to read with Mary, to translate Virgil, and to learn Sanskrit. His and Mary’s lives in Kenya are indeed Homeric. For our knowledge of their experience we are indebted once again, as for her work on the first published selection of Mary Casey’s journals, A Net in Water, to Louise de Bruin. Her loyal and painstaking editorial labour has a heroism of its own.