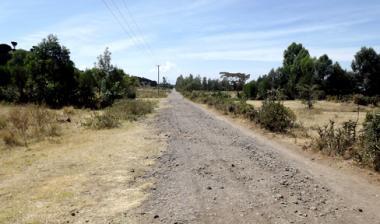 Standing on a bit of broken-up tarmac road above Gilgil last week, it was hard to believe that 60 years before this was the place for Kenya’s ‘Petrol Heads’ to gather on weekends and race around the three-mile track in MG-T series sports cars. Old Africa reader, Harry Vialou Clark, drove us around the track in the comfort of his air-conditioned Pajero and he assured me that he had been present as a twelve-year-old at the last race day held at Gilgil’s Langalanga track in 1952. There was a fatal accident that day and the track was closed. Another race track was opened later at Nakuru, also called Langalanga, from a Maasai word loosely translated to mean going around and around. Harry and his wife Allison and friends who are part of the Kariandusi School Trust and the Langalanga Scholarship Fund have been starting schools and sponsoring school fees for students in the area – and a quality primary and secondary school have both been built inside what was the old Langalanga race track. You can read more about the projects and how to help when you read our article about the Langalanga schools and the old racetrack in the April-May issue of Old Africa.