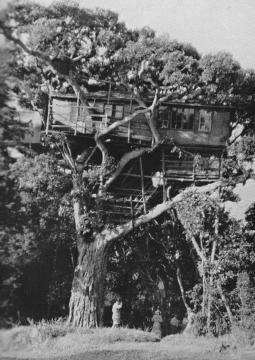 We have just had four days of celebrations to mark the Queen’s Diamond Jubilee, her sixty years on the throne. Of course there were many mentions of Kenya during the pageants, because that is where Elizabeth ascended the throne. She was at Treetops the night her father, George VI, died, though she did not hear of his death until she had returned to Sagana Lodge, near Nyeri. I wrote about the breaking of the news in my book Red Strangers. Some of my information came from Kathini Graham, the secretary for the Governor of Kenya when the news came. Kathini is still very much alive and is joining a group of us Kenyans for a pub lunch near Oxford in July.

Above is a picture of Treetops at the time and this is what I said in my book:

When the royal couple arrived, immense pains were taken to keep them safe [because of rumours of Mau Mau trouble], and they had to be hurried from the country not by any local difficulty but because the king had died and Elizabeth succeeded to the throne. The circumstances were peculiar. At Sagana lodge, after a night watching wild animals in Treetops, Trevor W. Jenkins, the personal policeman to the princess, was told by Michael Parker, Prince Philip’s aide, that he had heard a rumour from the press of the king’s death. Parker and Jenkins listened to the lunchtime news on the radio. What they heard confirmed the rumour and Parker telephoned Buckingham Palace to make absolutely sure. The Palace was shocked to find that the princess did not already know she was queen — many hours beforehand it had placed an embargo on the release of the news while Government House in Nairobi was informed of the death. The trouble was that the Palace’s telegram was in cipher, and the cipher books had been taken to Mombasa, to the ship Gothic, on which the royal couple was about to depart for Australia. No one could decipher the telegram at Government House.

Parker went to inform Prince Philip that the king was dead, and it was left to him to tell his wife the news. The Kikuyu telephonist at Nyeri, through whom all phone calls had to be routed, coped wonderfully with the spate of calls that had to be made. Kathini Graham, the Governor’s secretary on the spot, managed to get through to the princess’s dresser in London to arrange for a black hat to be ready at London airport, to be taken on to the couple’s plane upon its arrival. A black dress, intended for Anzac Day in Australia, was fortunately found in the royal luggage. Passengers on a BOAC plane were happy to disembark and allow their aircraft to fly the royal couple to England. A car took the royals to Nanyuki airstrip some forty miles from Sagana, past local farmers standing silently at the roadside. As dusk fell, a small DC3 bearing the couple took off for Entebbe airport in Uganda, where the BOAC plane was waiting to fly them to England.