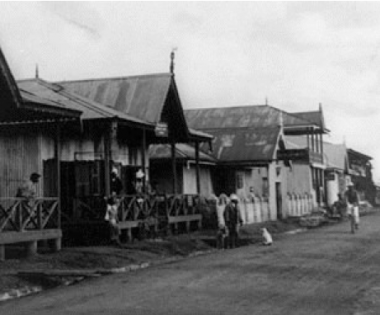 My 2 January blog talked about the arrival of Jewish people in Kenya. One of the earliest, Sammy Jacobs, was a real entrepreneur. He started ‘The Dustpan’ store in Nairobi, where you could buy almost anything. This is what the magazine African World said about his shop on 31 October 1913:

‘Where but a few brief years ago the lion made the plains ring with his roar, and the hippopotamus lumbered his way down to Nairobi rivers to slake his thirst, now stand numbers of elegant, handsomely appointed shops and stores.  Situated right in the very heart of Nairobi’s commercial activities, ‘The Dustpan’ ranks as one of the foremost of these business centres.  Probably in its own line, as a domestic pantechnicon, where all manner of household utensils may be purchased, ‘The Dustpan’ takes first place.  The business has leapt into public favour in an astonishing fashion and is now a household word among the thrifty housewives in and around town.  To particularise the various goods and chattels retailed by the firm is a task of great magnitude.  Everything household, from the proverbial needle to a complete bedding outfit, may be procured.  Here in fact, in the very heart of almost unknown East Africa such articles as hardware of every description, tapestries, rugs, matting, brooms, brushes, stoves, linen, sewing machines, cutlery etc. etc. can be found.’

There was a ready market for Sammy’s goods. There had been a great increase in immigration to Kenya in the three years before 1913 – so much so that the Union Castle Line had to put more steamers on to the East African route, and plans were made to deepen the harbour at Kilindini to accommodate them and the increased number of cargo boats. ‘East Africa’, said the African World, ‘is now considered as a thorough business proposition, its possibilities for both trade and development seriously considered by both firms and individuals on all sides.’