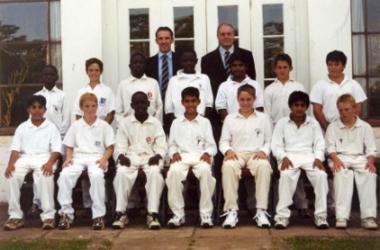 Yesterday we mailed out Old Africa issue 45, our February-March 2013 issue. Subscribers should get theirs soon and it should be for sale in Nairobi shortly as well.

The magazine features a story on the Kenya Kongonis Cricket Club, which has nurtured young cricket players since the 1930s in their Kongonis Colts programme. One photo  that missed selection for the article is the one above showing the Kongonis Colts Under-14s tour from 2002.

Derek Breed, who wrote the article, states: “Who, in the Colonial era, could have imagined a Kongonis international touring party of boys under the age of 14, perfectly balanced between the races – Africans, Asians and Europeans – travelling from Kenya to Holland and on to the UK. When I reflect now on the Kongonis’ history and on Kenya cricket generally, this photograph always pops up.  No words can capture the heart and soul of the new Kongonis better than this.”

Speaking of Derek Breed, space didn’t allow us to include a brief bio of his cricket credentials. Here’s Derek’s cricket record in Kenya. “Derek was part of the founding committee of the Nairobi Commercial Cricket League in the 1950s and on the Kongonis committee in the 1960s. After captaining Young Europeans v Young Asians in 1961, he was elected Tour Captain of the 1964 UK Kongonis tour after which he played a record 199 games on that yearly tour, spanning  35 years. In 1968 he scored the only recorded double century in the Kongonis history in a three-day representative game at Nairobi Club. Soon after in the same year, also at Nairobi Club, he set a then-record of 187 in the Europeans v Asians series. Also in 1968 he captained Kenya against India in a three-day Test with India fielding a near full Test XI, captained by the famous Nawab of Pataudi. The match was drawn.

In addition to the cricket story, the new magazine has articles from as early as the Mwele skirmish from 1895 to the story of two Americans who disappeared in Uganda while investigating reports of a barracks massacre. And the cover photo shows a young Jane Goodall reading her mail that had been delivered by missionary friends.

If you have a chance, read the latest Old Africa.