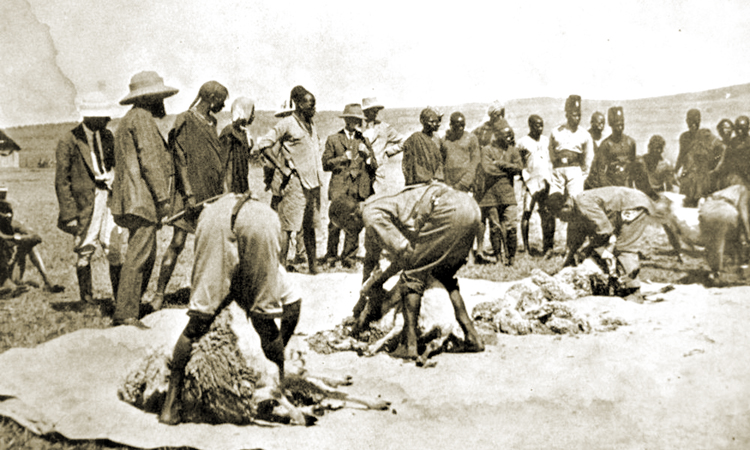 When the first white settlers started farming in Kenya in the early twentieth century, their enterprise was far from successful. Potatoes were tried, but they died of blight. At his first farm at Njoro Lord Delamere decided to raise sheep. He ordered Ryeland rams from England; and from New Zealand, Leicester, Lincoln and Romney March rams. The English batch arrived early in 1904 under the care of a shepherd, Sammy McCall. They were joined later that year by 500 pure-bred merino ewes from New Zealand, as well as Hereford cattle from England. The cost of all this was borne by Delamere mortgaging his English estate.

Soon the sheep began to sicken and die. Why? The local name for the land Delamere had bought was ‘angata natai emmin’, Maasai for ‘the plain of the female rhino without any milk’. The Maasai had never grazed their flocks in the area Delamere occupied. His merinos got footrot, his Ryelands lung disease and all his sheep had worms and harboured a grub which hatched in sinews. Four-fifths of the merinos died, as well as many of the others.

It was not until 1925 that the disease suffered by his livestock was identified, by the Rowett Institute in Aberdeen. It was named ‘Nakuruitis’, and was found to be caused by the land being deficient in minerals, mostly cobalt. Not until then was the disease conquered by giving animals mineral supplements. Meanwhile, at Njoro Delamere turned to cattle. He imported more Herefords, crossing them with native cattle. Unfortunately the native cattle gave the imported ones pleuro-pneumonia, while Redwater fever felled his imported Shorthorns. But some survived and gradually a grade herd was built up. This, too, was a failure because East Coast fever struck, for Njoro was infested with the ticks carrying the disease. Shearing the sheep that survived the onslaught of disease.

Delamere quickly decided that the land was to blame and, facing the inevitable, he looked for another area where he could buy land. He was allocated land near Elementaita, which he called Soysambu. It is an area still farmed by his descendants. At Soysambu Delamere turned to wheat farming. He made a furrow three miles long, ploughed by an old steam engine originally used in constructing the railway. The engine proved to be impractical, so he used a thousand bullocks instead. But who could drive the bullocks? The Boers beginning to come to the Eldoret area were skilled managers of bullocks and could be employed on piece work. Consequently 1,200 acres of wheat were sown, and binders and threshers were imported at great expense. Again, there was disappointment, for the wheat was infected with rust and destroyed. Delamere did not give up. Employing a scientist, he established a laboratory at Njoro and began to breed rust-resistant varieties of wheat, importing different strains from all over the world. Within three years he had harvested two trainloads of wheat. But he was £40,000 in the red and he had lost most of his lands in England. When he died in 1931 he was £500,000 in debt to the bank – an enormous sum in those days. His experiments, and those of other early white farmers, nonetheless established modern agriculture in Kenya.