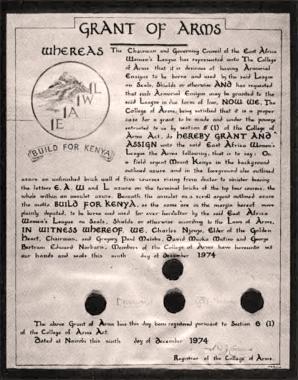 The EAWL, which of course still flourishes in Kenya, was begun in 1917. Above is the College of Arms Grant of Arms in 1974.

We had the annual general meeting of the East Africa Women’s League (UK branch) on Tuesday 19 March, at the Victory Services Club in London. The meeting and lunch was well attended (there are over 370 members) and afterwards we were treated to a talk by David Shepherd. Shepherd reminisced about paintings he had done in the past – once when painting on the Ark Royal he persuaded the captain to sail in the opposite direction because the light was ‘wrong’. On another occasion he told the Queen not to feed her corgis at table and she replied indignantly, ‘They’re my dogs!’ Shepherd said he cringed when he saw his early paintings. He was passionate about his wildlife foundation – check out its website.