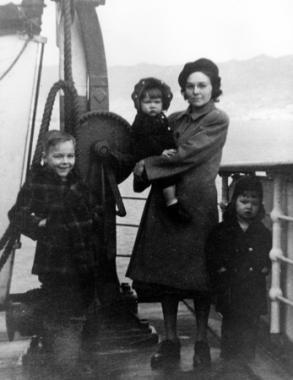 Being only three years of age on this epic voyage to East Africa via ship, my childhood memories are sometimes confused. I know we stopped in Naples, Italy, but remember nothing of the stopover except the visible evidence of World War II. Large, rusted hulks of bombed out ships were scattered around the port. We saw bomb-shelled buildings and blasted walls. A family photo has penned-in arrows showing piles of rubble from bombing raids.

After Naples we sailed past the Straits of Messina where ancient cities stood in view of snow-capped, yet steaming Mount Etna – an active volcano.

Our arrival in Alexandria, Egypt brought us to the continent of Africa. We entered a strange place with disorganized people in the confusing offices of Egyptian customs! I recall my father’s comments in his ledger that a group of 10-year old boys could have done a better job. We had never seen such confusion and consternation.

We disembarked in Alexandria on a Sunday – “Most unholy – this Lord’s Day,” my mother wrote in a poem she wrote about the trip.

In Alexandria we faced everything through unaccustomed eyes and wondered what our family was doing so far away from home. Patience is a virtue and in Cairo customs we needed to practice this characteristic of w-a-i-t-i-n-g!

Due to unforeseen delays my family had to spend some time in this ancient city. Finding a hotel and trying to purchase tickets for the next leg of our journey required more patience. We decided to explore some of Egypt’s history and visited the pyramids, a mosque, a zoo, a museum and a bazaar, where we purchased a few souvenirs. My dad had the awesome experience of climbing the Great Pyramid and I still have a chip that he brought down with him – taking pieces of the pyramid is forbidden today. Our family also bought some hand woven tapestries (one or two still remain in my curio closet!) and an alabaster carved model of the Sphinx.

Poverty reigned in the streets as beggars – blind men and crippled children – roamed about looking for a hand out. Varied forms of transport littered the passageways; tooting autos, horse-drawn taxis, camels, bikes and small burros.

Some of the other missionaries who had traveled this far with us now departed for other countries  – Belgian Congo, Sudan and other places. The separation remind us again of the many and varied costs expended to enter missions as a life-long commitment to God.

The next stage of our safari would involve many days and nights on various modes of transport as we navigated the challenging water courses of the great Nile River.

Here are a few photos from the trip. The family shot shows by brother Calvin on the left and me on the right. My mother Betty Donner is holding my younger sister Marlowe. The second photo shows some of the port of Naples with arrows pointing as some of the bomb damage sustained during World War II.

From the lights of New York City

Through the ocean far and wide,

God has blessed with tender mercies,

Nothing good from us did hide.

Though the ship did roll and toss us,

Many sights our eyes have seen.

With their hills carpeted green.

Next the tip of Spain was sighted,

Our first glimpse of Africa,

To us – a thrill well worth the wait.

Saw the lights of Rock Gibraltar,

Then to Naples, our first stsop.

And the castles on hill top.

Viewed the wrecks and pangs of wartime –

Filth and dirt, the poor and downcast.

Past the Straits of old Messina;

Mountains there on either side.

On to Egypt, Alexandria –

Masters of confusion, they.

Off the Gripsholm, on through customs –

Most unholy – this Lord’s day.

Cairo, was the place of waiting.

Seeing sights and shopping too.

Saw the Mosque and Pyramids;

Bazaar, Museum and the Zoo.

Here began the days of parting

Those with whom we’d played and prayed.

Leaving for God’s place of service.

All whose minds on Christ were stayed.