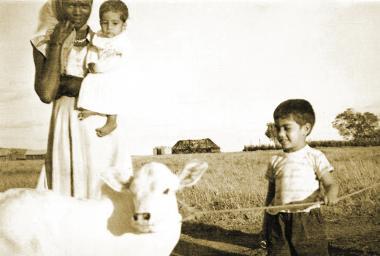 In our June-July issue of Old Africa we ran a short piece in our Mwishowe column about Conrad, a small boy born in Kenya in 1956 who died less than two years later. The story reflected the pain, shared by many, who have lost children while living in Africa. The story was by Conrad’s mother Elsie Maciel, and we included a few lines from a poem written by Conrad’s father, Mervyn Maciel. Elsie emailed and asked if we could publish the complete poem. We won’t have space in our next magazine, but we are reproducing the complete poem here in this blog.

Farewell to our darling Conrad

For to us was born our second boy;

Of angelic beauty, but frail physique

Yes destined to live in this world so bleak.

For months past birth we ne’er knew

That his days with us would be so few

Until one day our hearts were torn

When his troubles to us a specialist made known.

A congenital heart was what he had

The thought of which could drive one mad

But Bravely and patiently he struggled through

Despite his health he travelled afar

By plane and truck and motor car;

Oft a spell in hospital he spent

Striving hard for life under and oxygen tent.

From the NFD to Kisii with us he came

The weather didn’t suit, but he still ensured

That Mum and Dad and Clyde kept cheered.

For the last time his sweet voice we heard

He breathed his last – oh, so suddenly!

To the everlasting memory of our adorable son Conrad who left us on 3-1-58 – a year today, these verses are proudly dedicated) – Mervyn, Elsie & Clyde