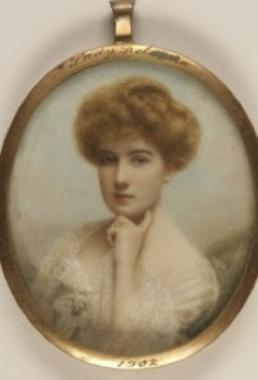 Last month I talked about why the 3rd Lord Delamere decided to settle in Kenya. He brought with him his new wife, Florence, daughter of the Earl of Enniskillen, a member of a prominent Ulster family. How did this very young member of the Irish aristocracy fare?

Florence Anne Cole was born on 3 February 1878, the daughter of Lowry Egerton Cole, 4th Earl of Enniskillen, and his wife Charlotte Marion Baird. She had a childhood of privilege and aristocratic ease, in the elegant surroundings of her father’s country house, Florence Court, County Fermanagh. Her father was MP for Enniskillen, and she had two sisters and three brothers. We first hear of her at the Duke of Devonshire’s costume ball in 1897, and it was shortly afterwards, when she was staying at the Delamere home at Vale Royal in Cheshire, that she met Hugh Cholmondeley, 3rd Baron Delamere, who was laid flat on his back for several weeks after a riding accident. Delamere fell in love with her and the couple  married on 11 July 1899.

Delamere had been seduced by Africa and its hunting possibilities and he decided to show the continent to his wife soon after his marriage. The pair arrived in Mombasa and travelled upcountry as far as they could, collecting birds for the British Museum. They then returned to England and Florence gave birth to a son, Thomas Pitt Hamilton, on 19 August 1900. When the child was two he was left in England while his father and mother went once again to East Africa, this time permanently. Quite what Florence felt about abandoning her baby can be imagined, but this was a different era and it was common for aristocratic children to be brought up by nannies.

Delamere was allocated land at Njoro, and Florence’s first home was a grass hut. After a few months she moved to a wooden hut, with beaten earth floors, without a door or windows. A few pieces of Vale Royal furniture stood incongruously at angles around the walls. Florence must have been very lonely, until Charles Clutterbuck became her neighbour. Charles had a daughter Beryl, who treated Florence as a surrogate mother after her own had departed. This was the girl who was to find fame with her book West With the Night. Florence busied herself with the farm poultry and ostriches (ostrich feathers were a fashionable hat accessory at the time). She gathered an extensive library, so she must have spent much time reading. People commented on her charm, sparkle, wit, and vivacity, all of them lost on the husband who was so often absent for months at a time and was, by all accounts, rude to her. She enjoyed one cheerful fortnight when Theodore Roosevelt stayed at the farm – he commented on her extensive library. When trouble brewed among local tribes Florence, alone as usual, borrowed 200 cartridges from Charles Clutterbuck in case she was attacked. She did not have to use them.

Her life improved slightly when the Njoro farm failed and Delamere moved to Soysambu, a farm in the Rift Valley, in 1910. By now Delamere had encouraged two of Florence’s brothers, Galbraith and Berkeley, to come to Kenya in 1903. Galbraith farmed next door to Soysambu, at Kekopey, and Berkeley bought land at Naro Moru. Galbraith said of Soysambu: ‘There’s something about it that always depresses me and I can’t help thinking that my sister must have hated it. There’s somehow a barrenness about D’s surroundings that I can’t explain.’ Florence must have been very upset when Galbraith was banished from the colony in 1911 after shooting dead a sheep-rustler on his farm (he was pardoned and returned in October 1914, after war broke out). It may have been such adversity as this, combined with loneliness and her husband’s neglect, that led Florence to have a nervous breakdown when she arrived in England for a holiday in 1911.

Florence loved hunting, dancing and society. These delights were seldom available to her, though we do find her wearing a red velvet dress at a Nairobi ball in 1906. Delamere was always short of funds and scrutinised closely all items of expenditure, so Florence was unable to indulge in any spending sprees. She bought some land of her own, between the Ruaraka river and the Kiambu road, though she nearly lost it in 1905 when she was told to occupy it or it would be forfeited (Kenya Gazette, 1 January 1905).

After her breakdown Florence returned to Kenya, but Delamere became ill in mid 1913 and was ordered to England. Florence herself was not well – her heart was failing. She found she could walk scarcely more than 100 yards. For a while she struggled on alone at Soysambu but eventually friends persuaded her to stay with them in Nairobi. Two days after Delamere returned from England Florence died, on 17 May 2014. She was buried three days later in Nairobi South cemetery, but in 1950 her body was exhumed and taken upcountry.