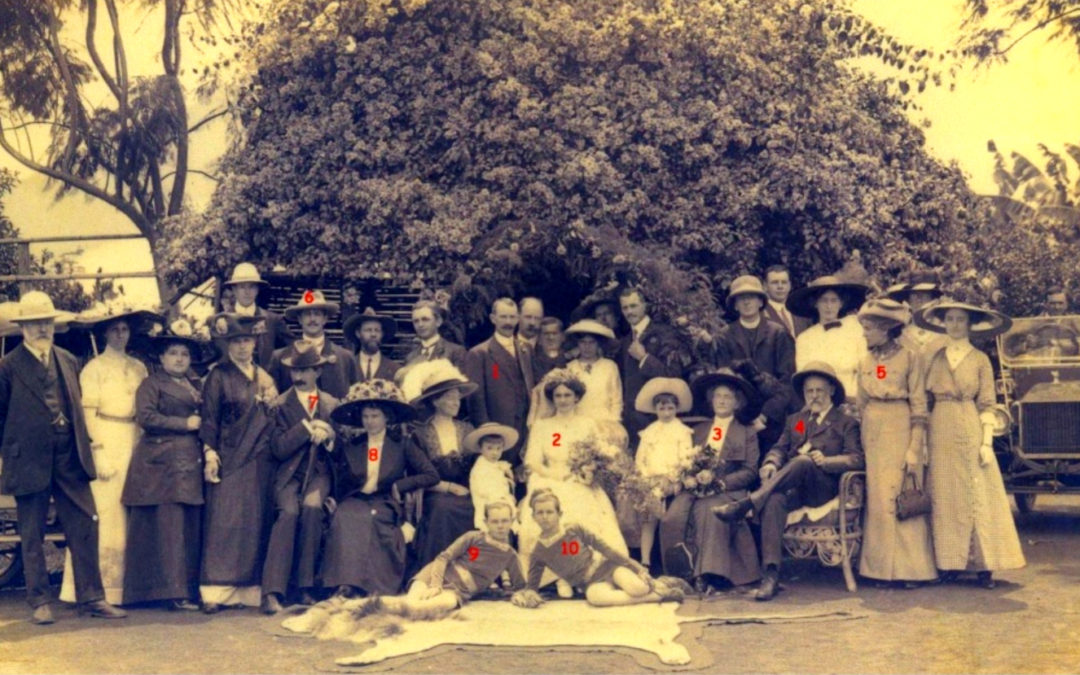 On 9 July 1902, at St Mary’s church in Johannesburg, Captain Herbert Hugh Cowie (born in South Africa on 8 September 1870) married Ada Evelyn Harries, the eldest of the nine children of Charles and Olivia Mary Ann Harries. She was born in Maseru, Basutoland, on 5 October 1877 and had grown up there and learned the native language. The couple lived for several years in Vereeniging, while Captain Cowie, who had earned his rank fighting in the Boer War, particularly in the Langberg Campaign, pursued his legal career. He had begun as clerk to the Attorney-General in Cape Town, and as Civil Commissioner and Resident Magistrate, Hope Town. He was appointed Justice of the Peace in 1894, when he transferred to Namaqualand, where he became commissioner for the relief of distress in Namaqualand and Bushmanland (South West Africa) in 1897. He was Civil Commissioner and Chief Magistrate in Bechuanaland, and joined the Bechuanaland Rifles. In the Boer War he served with the Yorkshire Light Infantry (mounted section) and was seriously wounded four times. After eight months’ sick leave, in 1900 he was attached to the staff of Lieutenant-Colonel Percy Girouard, in charge of South African military railways.

Cowie heard about British East Africa from his wife’s family members who had already gone there. Attracted by big game hunting, in June 1905 he decided to resign his important appointment as criminal magistrate in Pretoria. He and his wife sailed for Mombasa in May 1905. Their first home was a rented shack in Victoria Street, Nairobi, where their first son, Dudley Hugh, was born. They later moved to a house in Parklands. In 1908 Herbert Hugh became a member of the Legislative Council and also became honorary secretary of the Nairobi Club. Herbert Hugh Cowie was attracted to British East Africa because of the hunting opportunities.

By 1909 he was treasurer of the Nairobi Club, Secretary of the Brokers’ Association, Visiting Justice to the Gaol and to the Reformatory for Juvenile Offenders, a member of the Nairobi Municipal Council and a member of the Legislative Council. In the same year his second son Mervyn Hugh was born on 13th of April. The following year Ada and the children went to South Africa for a few months and were joined later by Herbert. When the First World War began Ada and Mervyn moved to a farm named Melrose, 30 miles from near Nairobi, near Thika. Dudley was at the government school in Nairobi and Herbert had gone down to Cape Town needing specialist treatment for wounds sustained in the Boer War. Melrose was the usual grass huts with walls plastered with cow dung. There was no mains water or electricity and the farm was remote, with no neighbours for miles. The kitchen was flattened oil drums covering three stones on the ground. Water was carried in cans from a spring about a mile away. Everything had to be put away at night, out of the reach of hyenas. Lions circled the huts at night. Supplies came by train from Nairobi along the Thika tramway and were dropped off along the line. Herbert returned from South Africa in 1916 and the family moved back to Nairobi to a large house called Daraja overlooking the Ainsworth Bridge, equipped with electric light and piped water. As the war continued, Ada welcomed men back from the front into her house and it became a sort of hostel, with camp beds in garages and tents in the garden. In 1921 the boys were sent to England for their education.

Towards the end of 1926 the family moved out to Mbagathi, Langata, living in a grass hut while their new house, Kikenni, was built. Dudley worked in the Treasury in Nairobi and Mervyn was articled to a firm of chartered accountants. The two sons were both keen fliers, at the airstrip on the Ngong Road. On 12 March 1928 Maia Carberry, who had completed an epic flight from Mombasa to Nairobi, invited the boys to join her in her plane. Mervyn flew first, without incident, but when Dudley went up with Maia, the aircraft went into a spin and crashed, killing them both. Ada was devastated at the loss of her 22-year-old son and Mervyn did not fly again until both his parents had died. Ada suffered a second blow when Herbert died on 31 July 1937, at the age of sixty-seven. He had suffered from his Boer War wounds for many years, latterly becoming disabled and eventually an invalid. He was buried at Forest Road Cemetery, Nairobi, and Ada continued to live at Kikenni, dying on 17 October 1955, when she joined her husband and son in Forest Road.

Her second son, Mervyn Cowie, went on to win international recognition as the founder of Kenya’s National Parks.