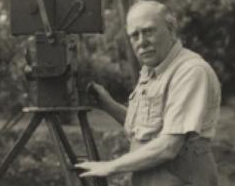 Herbert Binks (1880-1971), mentioned in Old Africa Aug/Sept 2013, was a photographer and astronomer, and one of Kenya’s earliest English residents. The red-headed ‘Pop’ was a well known figure in Nairobi for over sixty years, and many of his photos of people and places still exist. Unfortunately the photo archive he gave to the Kenya Archives was ruined in a flood.

Binks wrote a memoir, African Rainbow (1959), which many of you will have read. Alas, it is not entirely accurate, having been dictated in old age when memories fade, but it gives a good picture of early Nairobi. For example, Binks says he arrived in East Africa in 1900, but we know that he did not set foot there until 4 February 1902 (Binks’s diary). In 1901 he was in Plymouth, training to be a chemist (see 1901 census). He had been born in Outwood, near Wakefield, on 1 August 1880, the youngest child of six of John Binks, stonemason and builder, and his wife Elizabeth. His brothers also became stonemasons, but Herbert had different ambitions. After his chemist’s training with Robert Roper in Plymouth, he set sail for Africa.

He bought land on the boundary of the Kikuyu reserve, north-west of the railway line (Land Grant Application, 12.8.1902), and tried farming at ‘Kalula’, Thembigwa, near Limuru, for a few years, at first with potatoes and then with vegetables. As it proved not to be lucrative, he opened a photographic studio in Nairobi and sold his first photos in 1904. His fortunes rose and fell – there are several law cases against him noted in the Kenya Gazette in these years, presumably for unpaid debts. However, he felt settled enough to marry. His wife was Louisa Kay, the daughter of Joseph Jay, carpenter in Outwood. She was born in 1885, and became friendly with Herbert Binks as a child. She went to Africa to marry Binks in Mombasa Cathedral in 1913, and the couple had a daughter and a son. Herbert, in a modern touch, adopted his wife’s maiden name as his middle name. Their daughter died in her teens and their son Paul was also to die young – on 8 September 1936, at the age of twenty. Both children are buried in Forest Road cemetery, Nairobi. Louise, or ‘Binkie’, was courteous and gentle and maintained a periodic correspondence with Buckingham Palace.

On the outbreak of World War I Binks joined the East African Pioneer Corps (10.9.1914) and then transferred to the East African Mechanical Transport Corps. He was awarded a medal and star for his services. At the end of the war we find him on jurors’ and voters’ lists for Nairobi South. He and his wife lived in a simple iron house on stilts on Kilimani Road, near the Ngong Road. Their reception room was dominated by a photo of a lion at dusk given them by the renowned Cherry Kearton, whom Binks had assisted on his photographic trips. Binks was very interested in astronomy and built an observatory with three telescopes in his garden, from which he took excellent photos of astronomical objects. He ground his own lenses and silvered his own mirrors. At one point he was consultant to the University of Leiden which was building an observatory near Mau summit. He was also something of an inventor, taking out patents for ‘improvements in internal combustion engines’ (Feb 1922, GB 175437) and ‘supporting surface for aircraft’ (3 Sept. 1931, GB 175437). Ron Bullock writes: ‘A number of his inventions in aerial photography were adopted by the RAF in WWII, a helicopter patent was bought up by Westland Aircraft (but to suppress it, much to his annoyance!)’ Binks built a plane with an airfoil wing and towed it down Sixth Avenue [Kenyatta Avenue] behind his motor bike in 1910. (For a description and picture of this plane, see Stephen Mills, Dreams, Schemes and Flying Machines, 2009, and The Leader, 3 December 1910.) It lay rotting in his garden, but he claimed that the design was picked up by Fokker during a hunting safari in 1913. His astronomy won him honorary life fellowship of the Royal Astronomical Society, and another award he achieved was appointment as OBE ‘for public services to Kenya’ (1950, Supplement to London Gazette, 8 June). On 5 September 1952 he travelled back to Kenya from England on the Durban Castle (first class) after receiving the FRAS and staying with the Astronomer Royal at Herstmonceux Castle.

Binks’s business burned down in 1945/6. He retained his strong Yorkshire accent to the end and was fiercely patriotic. By now his trademark moustache was pure white and he was renowned on Nairobi roads for his erratic gear-changing. He died at Nairobi Hospital on 30 June 1971, having been predeceased by his wife Louise on 1 May 1969. Ron Bullock writes, ‘His burial [at Forest Road cemetery] was attended by just a couple of old friends, and his former African servants were in the majority; it was a rather poignant scene as they laid their little posies of wild flowers on the grave.’ There was a small drama at Louise’s burial. Ron Bullock, who was there, writes ‘Louisa’s grave was “reopened”, because she was buried in the wrong block. It was during the ceremony that another family friend whispered to me that this was the wrong grave. Immediately following the interment, as the grieving and elderly Herbert was being led to the car, my friend Brian Yonge approached an official with this information and the workers were stopped from filling in any more of the soil pending investigation. According to the story I heard later, termites had been at the record books and had nibbled away part of the block number. There was a further ceremony that afternoon for “reopening” and reburial in the correct grave. Herbert was never told.’