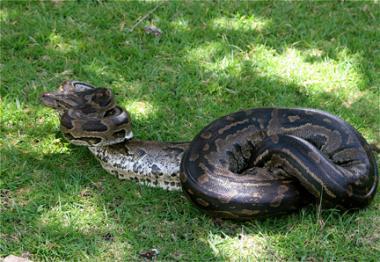 In the early 70s my wife and I were teachers at the Rift Valley Academy – a school located in the highlands of Kenya. Our students came from all over East Africa so during one of the vacations periods we decided to visit some of the parents who were located in eastern Congo.

Barb and I drove our old VW bug through Uganda, then ruled by the despot Idi Amin, stopping at various Game Parks on the way. Upon arriving in the Congo we drove to various mission stations where we stayed with the parents of our students. One of our final trips took us through the famous Ituri Forest. The road was a thin ribbon of red mud – permanently in the shade from the great canopy of trees. Occasionally we spotted short reddish people – pygmies who were the original inhabitants of the great jungle. Rounding a curve we met a group of pygmy hunters coming out of the jungle. They were armed with bows and arrows and one of them was carrying a loosely woven basket. They hailed us, holding up the bag so we could see its contents. I was curious so I stopped the car.  The hunters clustered around the vehicle and I looked into the basket. Inside was a large snake. It had a thick scaly body and was marked by chevrons of brilliant green, red and blue. On its V-shaped head were two long horns. I recognized it as a rhinoceros viper – a rare denizen of the jungle. It was famous for its long hinged fangs with which it could inject deadly hemotoxic poison.

It was a very large viper. Being young and poor I immediately calculated that if I could get it back to Kenya I could sell it to the snake park and make a tidy fortune. The pygmies wanted to sell it and I paid them the asking price of one dollar.

The mesh basket looked flimsy with many holes, but I figured that the snake could not escape. Barb was more dubious. I opened the front hood of the VW and put the basket in with our other bags. The snake initially seemed placid, but every time I hit a bump it would let out a loud hiss. Barb could hear every hiss and was convinced that the snake was escaping the basket and making its way into the passenger area of the car. For the rest of the day she sat on the car seat with her legs tucked under her. After hours of listening to the viper’s angry hissing we decided to call it Horace.

Upon arrival at our next stop Barb insisted that she was not traveling any further with Horace living in a porous basket. I agreed to make a better carrier. I constructed a sturdy wooden box with a double screen – a structure guaranteed to keep Horace safely inside and unable to bite us. I made a small hinged door on top of the box. But then the big question arose – how do I get Horace from the basket and into the new box. I thought about it and decided to use a rope noose attached to a long stick. I would open the basket, get the noose around Horace’s neck and then lift him up and drop him through the door of the box.

A crowd of Congolese showed up and clustered around to watch the exciting event. Horace lay calmly in his basket as I carefully cut it open. I gently placed the noose around his neck and started to lift him up. I discovered that Horace was a heavy snake and suddenly he went berserk – thrashing around with his muscular body. It was all I could do to hang on to the stick. Horace opened his mouth wide and exposed two long fangs and yellow poison dripped from his snapping jaws. The crowd of Congolese spectators took off running in all directions – leaving me to try and get Horace under control. Eventually he calmed down and I was able to drop him tail first into his new cage. Horace was not happy at being so rudely handled and kept hissing at me angrily – but eventually he settled into his new home.

On the long ride back to Kenya, Horace had a location in the back seat of the VW. However, he did not really enjoy traveling and continued to hiss loudly whenever the car hit a hard bump. After two days of traveling we approached the Uganda border where we had our passports stamped. Then a customs official came out to inspect the belongings in the car. He saw the box in the back seat of the car and bent down to look through the screen. Horace gave a loud hiss and the official jumped back in fright. He was quite upset that we were carrying a snake and wanted to see its papers. I had to admit that I had no papers for Horace – he was going to the snake park in Nairobi. Then the official asked if the snake had had its rabies shots. I explained that if Horace bit somebody, the last thing they had to worry about was rabies. The official nodded his head wisely and waved us through the gate.

So Horace arrived safely in Kenya. By then Barb was getting quite used to his loud hisses. But Horace would never be a pet so I drove him to the snake park and showed him to the curator. He was impressed by the size of Horace and stated that he was the largest rhinoceros viper he had ever seen. Dollar signs lit up in my eyes and I asked how much he would pay for Horace. The curator shook his head and said, “Nothing. We don’t want him. This snake is too big to adapt to life in captivity.” I saw my fortune quickly fading away. After some tough negotiating on my part I finally got the curator to take Horace – for free. I looked through the screen one last time and Horace gave me a goodbye hiss.