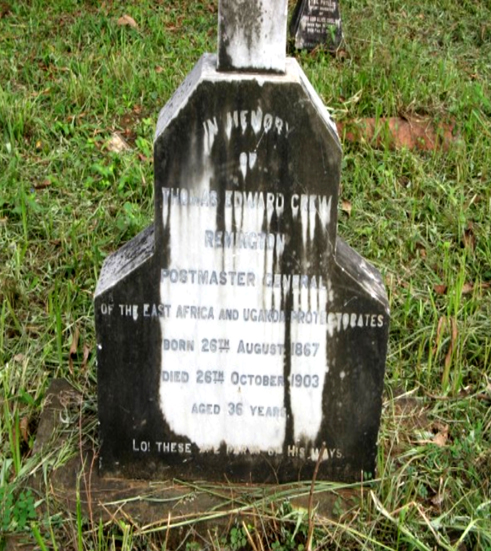 The postal service of East Africa was first begun as a branch of that of Zanzibar, and its first postmaster-general resided in Zanzibar for eight years before coming to British East Africa in 1899. In those early days the postal importance of Zanzibar was much greater than that of the mainland. However, when the construction of the Uganda Railway was begun, the growth of its business in East Africa so increased the postal importance of Mombasa that a change of headquarters was needed. The postal association of East Africa and Zanzibar was terminated at that time. The East Africa Protectorate was admitted to the Postal Union in 1895 and six years later the postal service of Uganda was united with that of East Africa. The principal feature of the postal service in early years was the immense value of money orders to remit to India on behalf of the Indian workers employed in the construction of the Uganda Railway.

That this was completed successfully was due to the work of Thomas Edward Crew Remington. Born in Teddington, Middlesex, on 26 August 1867, Remington lost his father in his early years, necessitating his mother taking in boarders and putting him out to work as a telegraph messenger before he was fourteen. He worked with Kingston on Thames post office before departing for East Africa as an employee of the Imperial British East Africa Company in 1890. After an initial posting to Taveta, he took charge of the IBEA Co’s postal department in Mombasa in 1891, living in a turret in Fort Jesus. In 1895, when the British Government took over the territory, he became postmaster-general, East Africa Protectorate and Zanzibar. The following year he found himself a French wife in Zanzibar, the sister of the Messageries Maritimes agent there. Remington oversaw an agreement to merge the postal administration of East Africa and Uganda in 1901, although the accounts and stamps of the two territories were kept separate. Kenneth Henderson described him rather unfairly as ‘an insignificant and rather common little man.’ Remington’s hard work took its toll and he died aged 36, of chronic gastric catarrh and a burst blood vessel, at his residence in Mombasa on 26 October 1903. He was buried in Mombasa cemetery at Mbaraki. Europeans began to come to East Africa in larger numbers in 1903 and this caused great changes in the postal services. Different coloured flags were flown from the roof of Nairobi Post Office to announce the arrival of a mail boat from Europe at Aden, to indicate that it was therefore time to post mail to go back to Europe, and also to show that the mail from Europe had actually arrived at the Post Office and was ready for collection. At night a similar series of coloured lights told the same story. The telegraph lines were extended in various directions and by 1909 there were 1,800 miles of line in Uganda and British East Africa. New post and telegraph offices were opened at different points and by 1909 there were 73. There were 150 officers employed in the telegraph construction department.

One of the most interesting features of the postal service was the internal mail service begun by Remington and the means by which it was carried to even the remotest settlements. With the exception of those places through which the Uganda Railway ran, every settlement depended for its mails on a system of native runners, and a vast network of these spread throughout East Africa and Uganda. Starting from the principal stations on the railway and at Lake Victoria, relays of African mail men were posted some 30 miles apart. The mail was passed from relay to relay, never pausing day or night until it arrived at its destination. Though many of these relay lines were several hundred miles in length the system worked with such regularity that the distant settlements regarded the failure of the mails to arrive each week at its appointed time with astonishment.

There were occasional failures but these were infrequent and usually spelt tragedy of some kind. The search party looking for the relay which had failed to arrive usually knew at what point of a particular stretch of country to direct its efforts. The dense forests or rivers in spate usually revealed some trace of the carriers. Fatal accidents were exceedingly rare. Through the more dangerous districts precautions were taken, with runners carrying lights at night and being armed with rifles. Even this did not always avert disaster and there were instances of lions attacking and devouring runners. Afterwards there was some difficulty in getting the mails carried over that particular part of the route and it was not until the tribal medicine man had sprinkled the track with medicine made from the bark of trees near the lions’ attack that the runners considered the roads safe again. The telegraphs also received attention from animals. The rhinoceros’ favourite rubbing post was a telegraph pole and giraffes regularly cantered beneath the wires, dragging them to the ground.