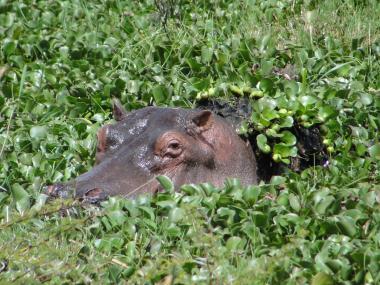 It was in an early morning call of desperation. “Bwana, kiboko iko ndani ya shamba! Saidia!” Here’s a loose translation. Mr missionary, please come down to the lake as the hippos have been eating in our gardens and have destroyed our crops!

My dad, Oliver Donner, was not an avid hunte, but when there was a need to assist someone in a plight, he was willing to help. Quickly he gathered up his rifle and walked to the lake with the distraught villagers to view the damage.

In the cool of the night hours, the huge hippos from Lake Victoria would come ashore to find grazing to sustain their huge bulk. The vegetable gardens or shambas of the local people were ripe and ready for the eating!

With large gaping mouths and heavy footprints, hippos always demanded their right of way. Back in the 1940s, most villagers planted special crops by the lake where the water was easily accessed for their plants. Invariably, just as soon as something became ready for picking, the hippos would arrive and devour everything in sight. Large 3 toed footprints would be deeply imprinted on the muddy ground wherever they chose to meander in their feeding frenzy escapades.

Brandishing BIG canine teeth and bulbous bodies, hippos are renowned for their short tempers and are best avoided. I was not present when my dear father followed the desperate villagers to the water’s edge but he entered into a dugout canoe to go hippo hunting! The guilty marauder was still lingering nearby, instilling fear in the neighbors.

In Africa, the hippo is known for killing more persons per year than any other wild animal! This bothersome hippo was lazily relaxing near the surface of the water. My dad took his well aimed shot. I’m sure it took several bullets to kill the intruder, but rather than sinking, the corpse rose to the surface where jubilant Africans sang my dad’s praises for the dispelling of this ogre!

With the news of the hippopotamus’ demise, people came running with their pangas to harvest a hippo feast. A hippo’s hide is very thick so it took some time just to expose the meat. The thick skin was used for whips, which could inflict a heavy wound. The meat could be very tough and as a young girl I remember it was very “chewy!”

In time, there was only a floating carcass for the vultures to enjoy as nothing was wasted!

My dad took a couple of hippo teeth to make what he thought would be a unique flower vase but alas it was not water tight and leaked.

In my collection of African curios I still have the teeth from this monstrous beast, I also have a great respect for them as well, shooting them only with my camera!

I also recall a more recent incident when my Barnett family were taking a “cruise” around Lake Baringo. We came upon a pod of partially submerged hippos and for some unknown reason the big bull suddenly charged our boat and scared the living daylights out of all of us! I had never been so close to an unhappy hippo and we were just able to get out of his way as he literally charged us, lifting himself out of the water in a fearsome manner! We were amazed at how high he could thrust himself towards our boat. He was NOT to be messed with! The boat was rather slow to respond making the incident even more scary!

Hippos are huge, heavy but not happy as they have a very unpredictable temperament. I’m very grateful that my father was able to rid the village of this pesky problem…the huge hippo. The villagers also learned where it would be more advantageous to plant their gardens so as not to put temptation in harm’s way. This way, everyone was happy, even the Heavy, Huge Hippo! Perhaps we should call him Hugo!