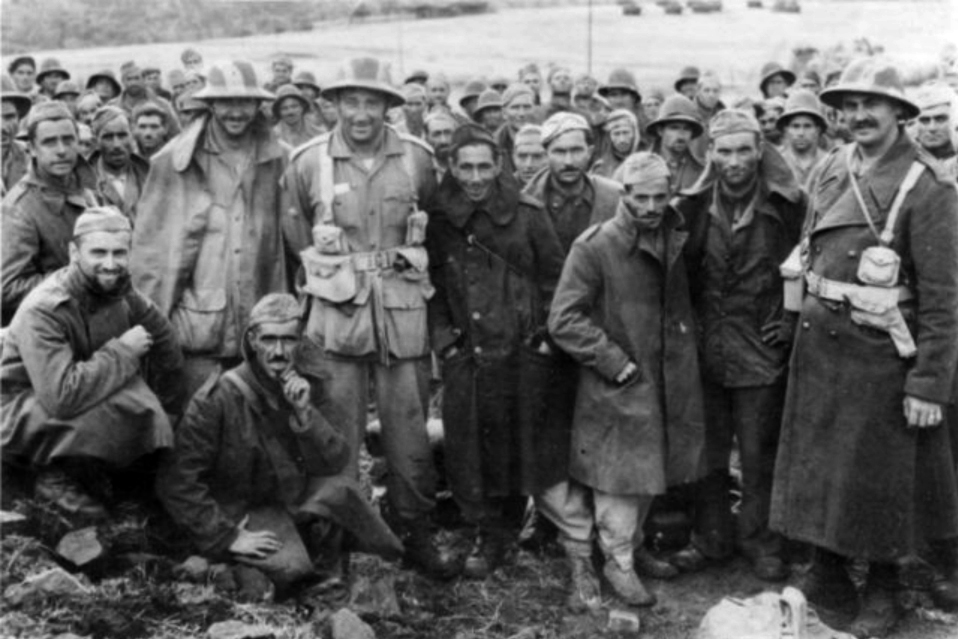 How did Kenya settlers hear about the outbreak of the Second World War and how did they react? The radio of course alerted settlers to the outbreak of war on 3 September 1939, and able-bodied men rushed to join up, while the women prepared to take over the running of the farms. Most young European settlers had belonged to the Kenya Defence Force, and had been summoned twice yearly for a fortnight’s training. The Kenya Regiment had also begun in 1937, with the purpose of training officers and NCOs for the King’s African Rifles. Now men were sent immediate telegrams ordering them to report to camp. The women bought up supplies of batteries, medicines, and spares for farm implements and machinery. The government requisitioned lorries and petrol was rationed – people were allocated ration cards. A list of maximum prices was published, to prevent profiteering, and there were warnings about trading with the enemy. The total available European manpower in Kenya was 8,998. Of these, 3,039 began serving in the forces, and, of the remainder, 3,041 were in essential occupations, 1,092 were discharged from the forces as unfit, and the rest were exempted because of age or other reasons (Brooke-Popham Papers, Bodleian Library, File 10).

Czechs and Germans were rounded up in Nairobi, though this was done in a pleasant manner. They were put into the Vermont Memorial Hall and the hall of St Andrew’s Church of Scotland, on camp beds. It was good-humoured, though Nazis and Jews were put on separate tables. There were 700 Germans in Kenya – 400 men and 300 women and children were brought in, sixteen of whom were released. People who had been in Kenya for years were freed, as were all who had fled Germany. Any women regarded as suspects who might endanger security were interned in a FANY camp conducted by Lady Sidney Farrar at Mau Summit, and men were interned at the Reformatory at Kabete. The film Nowhere in Africa (2001) portrays what happened. There was no confiscation of enemy property, but managers were put into possession of enemy farms, either to continue to farm them or to sell the crops and property. Unfortunately there was then (on 22 September 1939) a huge invasion of locusts from the north, which invaded farms in Central Province and reached Nairobi. By 6 October 600 people had been released from internment, including most of the Czechs and all the Jews.

Then weeks passed during the Phoney War, lulling people into a sense of security. But soon imported goods became increasingly scarce as ships were used to transport troops or were sunk by the enemy. Materials and clothing became almost impossible to find, especially shoes. There were food coupons for some items, but there was no shortage of fruit and vegetables. Sugar, though grown in East Africa, was rationed because it was reserved for the soldiers. Britain declared that it needed butter, cereals, oilseeds, flax, sugar, tea and sisal. A wartime policy for agriculture in Kenya was issued, and on 8 December 1939 it was announced that special short-term loans were to be made available to farmers to cover the cost of planting and cultivating crops, the purchase of fertilisers, and the expansion of animal husbandry. This meant that the settler farms, which had been in difficulties in the 1930s, staged a rapid economic recovery. The loss of men to the army was compensated for by the reorganisation of farms into groups under farm managers, who were drawn from those too old or unfit to fight.

The great fear in this war was invasion by Italians from Abyssinia. The Italians had an army of 200,000 and a substantial air force. To combat them, large numbers of troops began to arrive in Kenya and this had an effect on the level of demand in the country. To facilitate the supply of foodstuffs the government took a set of compulsory powers over labour and production in October 1940. Then, in November 1941, after a call for the maximisation of production by the Minister of State for the Middle East, the Kenyan economy was placed on a war footing. A guaranteed price per bag of maize was followed by grants for maize, wheat, flax and rye and guaranteed returns per acre for maize and wheat. There were Local Production and Manpower committees run entirely by farmers, which oversaw local production – failure of farmers to comply led to fines and imprisonment. Farmers needed more labour to increase acreage and production, and the government helped them solve this problem by introducing labour conscription in 1942. This caused controversy, however, and was suspended the following year, before being reintroduced with tighter controls. The question of the forced sale of Africans’ cattle was also problematic. District Commissioners had to explain to headmen that cattle sales were vital for the war effort, though in Maasai areas direct purchase was avoided. Unfortunately many Africans were unfairly treated in this matter, being offered lower prices than Europeans for similar cattle and maize.

Fighting began with the Italian bombing of the Southern Rhodesian air base at Wajir in Kenya. Kenya fought back, pushing the Italian forces through Somaliland, Eritrea, and Ethiopia until the Italian surrender after the Battle of Gondar in November 1941 marked the end of large-scale hostilities. Hundreds of Italian prisoners were taken to Kenya. There was a surge in food requirements for them, and for Polish refugees, troops in training for the Burma campaign, and convalescent soldiers. Between 1941 and 1943 military purchases in Kenya of meat, maize, vegetables, bacon and dairy products almost doubled in value. There were, however, plenty of skilled Italian prisoners to help on farms and other projects. For example, when Turi School burnt down in 1944, it was rebuilt by Italian prisoners.