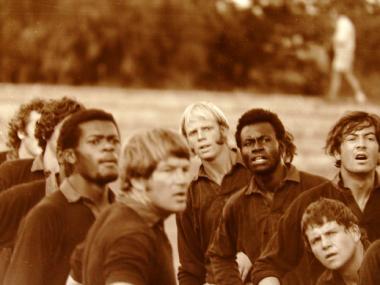 Who’s who? In 1976, he first year I played rugby for Kenya Harlequins, the Kenya Cup was a split side competition with each of the big Nairobi clubs putting up two sides. I played for Quins Ruffians. We won the Kenya Cup semifinal against Nondies Lions and the second Quins side, the Vandals, beat Nondies Tigers in the other semifinal. This set up a Kenya Cup final between Quins Ruffians and Quins Vandals. Because of various trade restrictions at the time after the British Lions had played in South Africa, it wasn’t possible to import rugby gear from the UK or South Africa and all we had left at Quins were two old sets of black shirts. So when we squared up on the field, it was hard to tell who was who. In the end the final score was 14-14. The ref gave up and said Quins were the winners of the Kenya Cup.