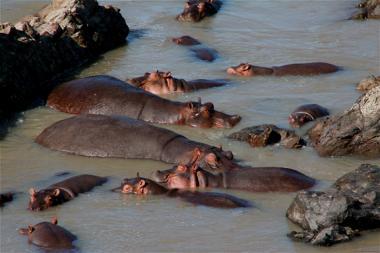 The following blog is taken from my latest book titled “The Red Pelican”. It is the third book of my Sudan trilogy and follows “Drinking the Wind and “Chasing the Rain”. All of these books can purchased at Amazon.com

Dick Lyth and his soldiers fought several tough battles against the Italians in the rugged hills of the southern Sudan. They then retreated to a pool on the Kibbish River to rest up and heal from their wounds. Dick himself had a bullet wound in his thigh and needed time to gain back his strength. The camp near the pool may have been idyllic during the day, but it was miserable at night. Everyone was plagued by the profusion of mosquitoes. One morning Dick woke up with a severe headache. By noon he had a high fever and was sweating profusely. He had caught a serious case of the dreaded malaria. He alternated between shivering with cold and burning up with fever. The soldiers were quite concerned. They knew well the dangers of malaria and there was a real possibility Dick could die in the night. Musa, the master sergeant, and Kuju, the orderly, came to talk to Dick. He was lying in a pool of sweat in a fever-induced stupor. Kuju shook him by the shoulder and finally got his attention by shouting, “You are very sick! We want to pray for you so God will make you well!”

Dick just groaned, but Kuju persevered. “The Bible tells us what to do when a person is sick. The Christians should gather together, anoint the sick person with oil and pray for him.” Both Kuju and Musa continued to insist that they needed to pray for Dick so he would get well. Dick groaned again, but he could see Kuju and Musa were serious. He nodded and told them to go ahead.

Kuju ran off to his kitchen supplies and returned with two containers. “I only have two kinds of oil: kerosene and hippo fat. Which one should I use?”

If Dick had been well enough he would have laughed. He lifted his head and pointed at the small piece of hippo fat. Kuju solemnly picked up the solidified hippo fat and made the shape of the cross on Dick’s forehead and again on his chest. He prayed that God in his power would show mercy to Dick and make him well. Then Muss prayed as well. A number of the soldiers stood around to offer their support.

That night Dick’s fever broke and by morning he was feeling well again. This was the only time Dick got ill in the entire campaign. Kuju and Musa were nonchalant about Dick’s healing. They had prayed to God and of course God had answered. Dick was impressed by their faith.