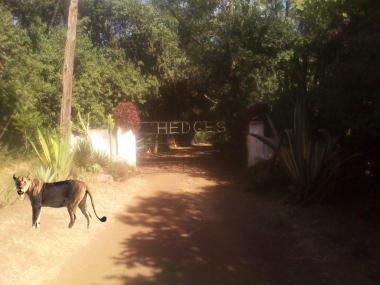 It is about a mile from Margaret Downey’s house to the Giraffe Centre. On Saturday 11th February 2012, Margaret rang up the Kenya Wildlife Services (KWS) because two large female lions, assumed to be mother and daughter, had been prowling around her plot and her staff were reluctant to cross the lawn from their quarters to her house. KWS arrived and couldn’t find any trace of the lions. But they knew that a pair of lions had wandered away from the Nairobi National Park and had terrorised the Giraffe Centre a few weeks earlier and had actually killed one.

KWS visited the Giraffe Centre but they hadn’t seen the lions for the last 24 hours. However, the KWS soon found the lions in the vicinity. Because of walled gardens and closed gates, the only route any animal could take between Margaret’s house and the Giraffe Centre is along the little frequented Milima Road then down the Mbagathi Lane dead end, on through our drive and out onto the track that leads to the Giraffe Centre. To confirm this theory I questioned our German Shepherd, who has a different bark for all types of trespassers; one for humans, another for monkeys and different again for warthogs. The crescendo of noise erupting from the dog in the early hours of the 11th had not hitherto featured in his vocabulary. In fact, the last time I heard a similar bark was four dog generations ago when both leopard and lion were not uncommon nocturnal visitors in Langata. Having read the evidence, the reader will decide whether or not a lion walked up our drive. I’ve combined a photo of my gate and a lion to represent the lion I believe visited our property in February.

The incident reminded me of one of the more interesting evenings of my life. Shortly after Independence I, with the help of my friends, organised a Son et Lumiere show called ‘The African Night’ on the tourist circuit of the Ngong Hills about twenty miles out of Nairobi. The audience would arrive by car or minibus from Nairobi and we optimistically had sitting for one hundred visitors. The backdrop to the sound and light show was a rock face of the Rift Valley and the twenty amateur actors in appropriate costumes were appropriately illuminated as the pre-recorded voice told the history of Kenya. Nothing was more annoying than when the lights were dimmed and the voice penetrated the stillness of the African night with “Roll back the centuries, let time unfurl…” and then for the scene to be lit up with the headlights of the car of some late arrivals and usually with a blowing exhaust! We therefore had a notice posted two hundred yards from the site – ‘Please leave your car here. Our staff will escort you.’

At 22:00 hours that moonless night the show was over, the applause died down and around fifty delighted clients collected the blankets they had been advised to bring and headed back to their cars. At 22:05 hours we heard the first scream. Six grown lions were sauntering in the pitch black around the 25 parked cars and one or two of them were walking up and down the track. I grabbed one of our megaphones and assured everyone in the pitch darkness that lions only eat people as a last resort when no other food is available. My encouraging words did not go down very well. However, we had a happy ending and the lions harmed no one. We received good coverage in the East African Standard and the incident confirmed my faith in tourists who will bitch like hell if the bath water is not hot enough but when faced with a real challenge will act courageously. One spoke up saying, “Don’t worry, as far as I am concerned it is the perfect end to ‘The African Night.’ I will be able to dine out on this one for years.”