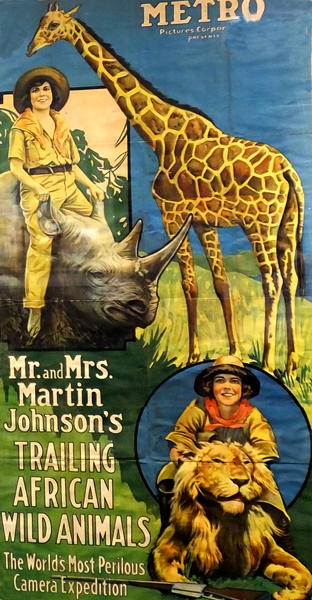 Issue 84 of Old Africa has a story about Martin and Osa Johnson and their first safaris to Kenya to film Africa’s wildlife. This blog gives some of the background on Martin and Osa’s life before coming to Africa. When he was 12 years old Martin Johnson moved to Independence, Kansas with his family in 1896. His father, John, opened a combination jewelry store and book shop. In addition he acquired a franchise to sell Eastman-Kodak cameras and film. Little did he know this decision would affect the course of his son’s life. Martin fell in love with photography and John encouraged him, even building a darkroom for his son in the rear of the store.

Bored with his routine life in school and helping in his father’s store as a teenager, Martin announced that he was going to travel and make money. In the summer of 1901 when Martin was 17 he took a camera and a tripod and a tent for a darkroom and set off in an old buckboard pulled by a pony named Socks. As an itinerant photographer, he roamed from town to town in southeastern Kansas. Late that summer he stopped at Chanute, a town with no photographer, and set up his studio.

One customer who came for a ten-cent portrait was seven-year-old Osa Leighty. With her dime clutched in her hand, Osa dragged her three-year-old brother Vaughan to the photographer. Vaughan arrived with his sister, hot and tired, with tears staining his face. Osa had envisaged a prim and proper portrait of her little brother. Instead, Martin took off the little boy’s white embroidered collar and deliberately messed up his hair. The resulting photo showed a grinning urchin with tousled hair. Martin was pleased with the result. Osa left seething with rage.  She didn’t even know the name of this rude teenage photographer, who would later become her husband.

Martin’s interest in trick photography got him in trouble when he went back to high school that fall. Using photos he had taken at a school outing, he made composites showing teachers together in romantic poses. He passed them out to his fellow students who spent a hilarious morning looking at them. However, the prints got into the hands of the principal, who saw them as indecent. After tearing up the photographs, he expelled Martin from school.

By 1906 Martin was working at his father’s jewelry store, but he longed for a chance to travel the world. About this time the writer, Jack London, who had achieved international fame for his book The Call of the Wild, was planning a seven-year trip around the world with his wife Charmian in a boat he had commissioned called the Snark.  One evening Martin saw a three-page letter from Jack London in his sister’s copy of the Woman’s Home Companion magazine. Jack described his trip, which would include exploring in the South Pacific. Martin decided he must be on that boat with Jack London. Martin wrote a six-page letter to London, asking if he needed one more crew member. He touted his photography skills and offered to work for no wages.

Amazingly, the letter caught London’s eye and he sent a telegram saying he needed a cook. “Can you cook?” read one line of the telegram. Even though Martin could not cook, he sent a telegram back saying he had six months experience as a cook. In a follow-up latter he said he “did not cook any fancy dishes – all plain food.” He also stated he could do developing and photo finishing. “I certainly claim to be an expert in that line.”

London offered Martin the job and told him to come to Oakland, California by December 10th.  Martin used the time to learn a bit about cooking from a friend Jess Utz.

It took a few months for the boat builders to finish the Snark, but on 23 April 1907 thousands of spectators as well as photographers and newspaper reporters swarmed the Oakland wharf as London and his crew set sail.

The Snark, poorly designed to meet London’s luxury requirements, had a leaking hull and the bathroom malfunctioned. Against the odds, the Snark arrived in Honolulu harbor on 20 May 1907. By then it was something of a wreck. London was determined to sail on and spent a vast sum overhauling the boat, which took five months.

Finally, on 28 June 1908 the Snark arrived on the south end of the Solomon Islands. They spent about four months visiting various islands. On Ugi Island, Mansel Hammond, an Australian trader, and Mr Drew from the Melanesian Missionary Society, helped the Londons make contact with a chief name Ramana.  Ramana’s village had a magnificent canoe house, supported by eight sculpted posts, which the Londons purchased.

However, Jack London became quite ill with malaria, skin ulcers, dysentery and dental problems. He also suffered from swollen feet and hands. In early November Jack, Charmian and Martin left the Solomons and took the steamer Makambo to Sydney, Australia to seek medical treatment. They left the Snark in the islands, planning to come back and resume their trip. However, the Australian doctors urged Jack to return to California.

The decision dismayed Martin. He went back to the Solomons and helped the Captain, Charles Reed, to bring the Snark to Australia where it was put up for auction. Martin, determined to circumnavigate the globe, took a ship from Sydney to Europe, before coming back to Independence, Kansas in the summer of 1909.

Martin decided to use his experience and became a travelogue lecturer. He and a business partner, Charley Kerr, converted a store into the 340-seat Snark Theatre. Martin narrated his travels with lantern slides of his photographs. The show was so successful that they opened a second theatre – Snark No. 2. Martin also took his show to nearby towns, including Chanute, where Osa Leighty, now sixteen, still lived. Osa’s friend Gail Hamilton got a job with Martin singing at Snark Theatre No. 2. In May 1910 Martin invited Osa to substitute for Gail, who had a sore throat. Osa, who dreamed of an acting career, accepted and her beautiful soprano voice filled the theatre. Soon Osa and Martin had fallen in love and on 15 May Martin and Osa eloped.

Martin signed up with the Orpheum Vaudeville Circuit in Chicago in 1911 and he and Osa travelled widely with Martin giving his travelogues and showing photos of the South Pacific island. But he needed newer and better photos to keep up interest in his show.

In 1917 a group of investors raised $7,000 to send Martin and Osa to the Solomon Islands and the New Hebrides to make a motion picture. Martin and Osa were determined to shoot the best motion picture ever made in the South Pacific. On the island of Malaita, with the help of William Robert Bell, a colonial official, Martin took superb still photos and shot thousands of feet of motion picture film. Today this film record is an important part of the culture heritage of the Solomon Islands.

Martin soon concluded that Osa’s true value lay in front of the camera, not behind the viewfinder. She posed and pantomimed with the islanders. The resulting screen images of this petite American woman surrounded by ‘headhunters’ drew thousands to the box office.

By December Martin and Osa had shot close to 20,000 feet of film in the New Hebrides. They developed their film in Sydney, Australia and sailed for San Francisco, arriving in February 2018. Martin’s film was technically superb and educational. But he also infused the documentary with entertainment. The resulting silent film, Among the Cannibal Isles of the South Pacific, received widespread acclaim. One reviewer called it “a rare combination of entertainment and instruction.”

The financial success of the film led to second trip to the South Pacific in 1919, including a foray into Borneo to film the wildlife there. The Borneo footage led to a successful film called Jungle Adventures.

In 1921 The Explorers Club invited Martin to become a member. At the Club, the Johnsons first met Carl Akeley of the American Museum of Natural History in New York. Akeley, who had made four extensive collecting trips to Africa, convinced Martin to visit the spectacular plains and forest of East Africa. Martin got financial backing and he and Osa prepared to sail for East Africa in the summer of 1921…

The story continues in Old Africa issue 84. Get your copy from our website: www.oldafricamagazine.com