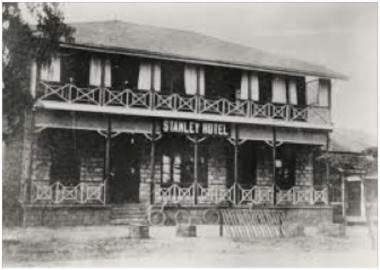 Mayence Ellen Bent, the founder of the New Stanley Hotel (now the Stanley Ramada) in Nairobi, had a most interesting early life. She was born in the district of St Pancras, London, on 17 April 1868, the daughter of Walter Bentley Woodbury and Marie Olmeijer. Her own name and those of her sisters (Florence, Constance, Hermance, Valence, Fayence and Avence) alert us immediately to the fact that this was an unusual family. And indeed it was. Her father W.B. Woodbury was a famed photographer (just google him to see how famous he was) and her mother was the daughter of a Borneo trader, Charles William Olmeijer, of mixed Dutch-Malay descent. Joseph Conrad had visited his trading outpost at Tanjung Redeb on the Pantai river and this gave rise to his famous story Almayer’s Folly.

When Woodbury was photographing in the Dutch East Indies, he saw a beautiful schoolgirl, Olmeijer’s daughter Marie. He determined to marry her and this he did in Batavia in 1863, taking her back to England with him. There the couple had one son and six daughters with the unusual names – Mayence is the French form of the town Mainz.

How did Mayence get to Nairobi? She lived in Penge and Croydon as a child and then she and her sister Constance went out to South Africa, where Constance opened a boarding house. They were joined by their step-brother William Stanley Bent. What had happened was that the girls’ father, Walter Woodbury, had died in Margate in 1885, and five years later his wife Marie married Edward Stanley Bent, a struck-off solicitor who spent five years in jail for receiving stolen goods. One of his sons by a previous marriage was William Stanley Bent, born in 1858. On 30 April 1896 Mayence and William Stanley Bent had a daughter in South Africa – Gladys Mayence – and it may have been that this was frowned upon and the couple left for East Africa, arriving in 1898. There they were assumed to be a married couple (there is no record of them ever marrying). Gladys was baptised in Nairobi (27.12.1904) by Rev. Marcus Falloon, and she was enrolled at the Uganda Railway School in Nairobi when it opened on 20.1.1904.

William had previously worked on the Nigerian Railways, and he obtained a job as a chief clerk in the Loco Department of the Mombasa-Lake Victoria railway line. William was the Nairobi representative of the Railway Strike Committee on 31 March 1900. He was given three months’ notice by the railway in September 1901, and this encouraged him to make a land grant application in ‘Kikuyu’ (4.1.1902). had 40 acres and a two-acre vegetable garden. We find him winning a prize at the Mombasa Show on 24 July 1903. Another job he had was as an agent for the East African Standard (January 1903).

Mayence also put in a land grant application at Fort Smith (29.6.1903), and there she made farm products, which she advertised in the East African Standard. Her ad for her butter ran ‘Fort Smith Butter. Mrs Bent Nairobi. It Takes the Cake. It would Keep for Ages but People don’t Give it a Chance’. But the farm could not provide a living and May took a job in 1902 as a clerk in a store owned by Tommy Wood in Victoria St, Nairobi (now Tom Mboya St). The store served as a butchery, tea room, hardware shop and tailor’s (May was the dressmaker). Above it people could stay in four simple rooms with calico walls, called the ‘Victoria Hotel’ but there was never enough space and May saw an opportunity. She went into partnership with Daniel Ernest Cooper and opened a 15-bed boarding house, the Stanley Hotel (1.4.1904) in Victoria Street. It was a wooden building, of two storeys and soon had a liquor licence (March 1905). The following year a fire destroyed it. May moved her guests to a temporary building, under a tarpaulin. A permanent building was erected by 1913 where the Sarova Stanley now stands at the corner of Kimathi Street and Kenyatta Avenue (formerly Sixth, then Delamere Avenue).

Meanwhile William Bent operated in Nairobi a private labour exchange (one purpose of which was to keep wages low), advertising each week in the East African Standard. Things were going badly for the pair and William was declared bankrupt in Nairobi on 21.1.1908. He then got a job in the new Labour Bureau in Nairobi. He came to a sad end, dying of pneumonia in Nairobi on 14.7.1918. He is buried in Nairobi South cemetery.

By 1908 May had taken up with Frederick Francis Tate, fifteen years her junior (he was been born in Wolverhampton, 30.6.1883), who arrived in East Africa in 1906. It was Tate and Mayence who built the New Stanley Hotel, but for that story you must wait till next month’s blog.