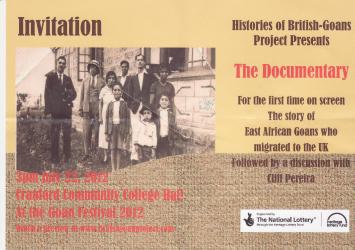 Here in England we are all geared up for the Olympic Games, starting this week. I hope Kenya’s athletes are on top form and win many medals.

I have just been reading a fascinating book – Mishkid: A Kenyan Childhood, by David Webster (available on Amazon). David was the son of Eric Webster, a missionary in Marsabit. Mishkid stands for missionary kid. David tells of the early days in Marsabit, the hazardous roads, the building of a clinic, church and school. Something he says is very true: ‘My generation of white Kenya kids represented several very different communities. The children of civil servants, and other government employees, were often relative newcomers to Kenya. Their parents had been posted to the colony. They sometimes arrived at school fresh from England, with very white skins, rosy cheeks and relatively long shorts. We called them, disparagingly, “pongos.” They soon tanned and toughened up and took inches off their shorts. Their parents, the colonial officials of the day, are usually regarded nowadays with disapproval, even contempt. They are accused of exploitation and arrogance. The truth is that many of the white government officials of the time carried out their jobs with exemplary dedication and expertise. Many indigenous Kenyans who recall those colonial days remark on the lack of corruption, and the ability to get a fair hearing and a just ruling. Some of the white provincial and district commissioners, and young district officers, were men of great ability and integrity, and do not deserve to be tarred with the racist, exploitative brush.’

Two days ago I met up with several of just such officials, for a Kenya pub lunch at Sandford, near Oxford. Among the (admittedly ancient but none the less vigorous) attenders were June Knowles, daughter of Oscar Watkins (see her book Oscar from Africa by Elizabeth Watkins, on Amazon). June, now 89, is still writing books, but she tells me age is taking its toll. Also at the lunch were Peter Fullerton and Bobby Winser, former colonial officials, and Sir John Johnson, former British High Commissioner for Kenya. Mervyn Maciel and his wife attended and gave me the exciting news that there is a project to gather the history of the East African Goans, many of whom migrated to Britain after Kenya’s independence. The History of British Goans Project has been given a British National Lottery Grant (see www.britishgoanproject.com). There is no doubt that, before 1963, Goans were an essential part of the government.