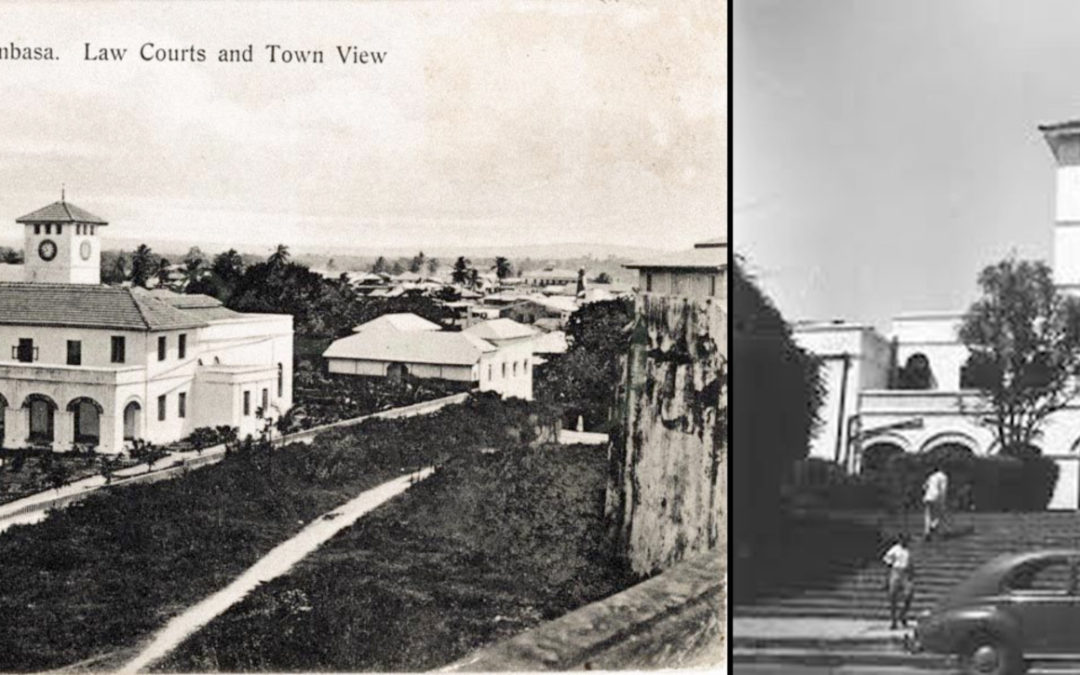 On 30 August 1984 the new Law Courts were opened in Mombasa, but where had justice been dispensed beforehand? A British court, presided over by an English barrister, had been established in a godown near the old harbour in Mombasa in 1890, when the Imperial British East Africa Company was in charge of the area. In about 1898 the court moved into the old police headquarters opposite the entrance to Fort Jesus (where the curio market now is). Then magnificent new premises were built in Fort Jesus (now Nkrumah) Road. On 31 December 1902 a fine building to house the law courts, as shown below, was opened by the Commissioner, Sir Charles Eliot, and the High Court based in Zanzibar moved to Mombasa. To begin with the judiciary followed the practices of Bombay’s High Court and was staffed almost entirely by personnel trained in India. In 1911 the High Court was transferred from this building to Nairobi, and British Indian legal practices ceased to be observed. Instead, the practices of English law were substituted. Non-High Court cases were still heard in Mombasa.

The building material used was coral rag bound with lime mortar and faced with plaster. A deep arcaded veranda surrounded the building on the ground floor, supporting an open-air balcony above. It was more usual in this style of building for the upper balconies to be enclosed. Everywhere internally they used dark, solid, well-carpentered wood for doors, staircases, shutters, balconies and floors. Teak was the wood generally used, for it was almost impervious to white ants.

The Law Courts has a central block faced with seven roman arches and flanked with symmetrical wings. Broad steps lead up to the entrance (now shaded by a huge neem tree), topped by a clock tower. The clock chimed every hour and was used as Mombasa’s standard timepiece. The entrance hall has an interesting and massive stone, dated 1677, set into the wall. The inscription on the plaque below reads: ‘The above inscription was taken from the ruins of Fort St Joseph erected by the Portuguese between Ras Serani and Ras Mzimli Mombasa.’

Beyond the entrance hall is a courtyard, from which leads a double staircase, with carved newel posts, to the floors above. The panelled main courts lay on either side of the central block. Beyond the courtyard lay the law library, filled with old law reports and annual gazettes listing all the cases to be heard. At the back of the building were the lavatories, one for each category of prisoner, and the cells. There was also what appeared to be a huge bread oven but was in fact a furnace used by the next-door Treasury for burning out-of-use old banknotes. If convicted, defendants at the courts had only a short journey to Mombasa jail, housed next door in the lofty and impregnable Fort Jesus. The white prisoners incarcerated therein had their meals brought to them from Mombasa Club next door.

What happened to this splendid old building when the law courts were moved to Kizingo? It was converted into an informal gallery, with regularly changing displays of local art, Kenyan crafts, school competition pieces and votive objects from various tribal groups. Paint peeled off the walls, some of the wooden railings were stacked against walls, and makuti roofing on the courtyard was in tatters. It was a sad end for a splendid building. But then three or four years ago the building was repossessed by the judiciary. It is being renovated and, in tandem with the National Museums of Kenya, it will become a judiciary exhibition with a temporary gallery available to other parties. A railing has been added to the perimeter wall, which is simple and tastefully designed.