Nairobi in 1922 – Excerpt from new book Among Whistling Thorns 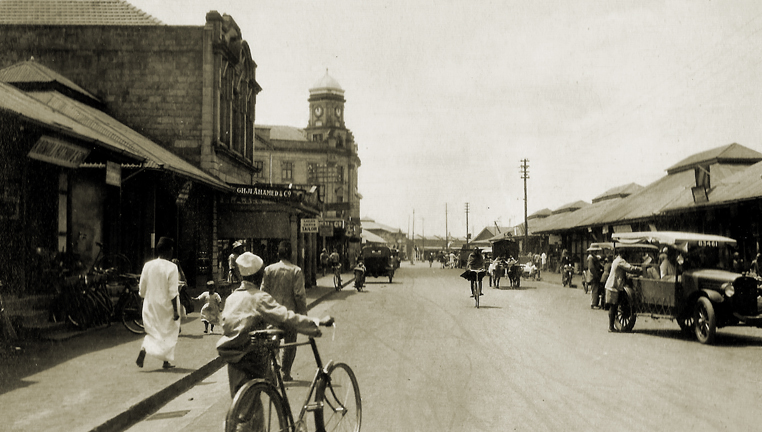 Old Africa recently published a memoir written by Joan Booth, who came to Kenya in 1922 to help her brother Eric Booth establish a ranch in Rumuruti.  The manuscript had been in the possession of Celia Owles of Naivasha for many years. She approached Old Africa, asking if we’d be interested in publishing her Aunt Joan’s book.  The book, Among Whistling Thorns,  is now available in Kenya from select bookstores in Nairobi or directly from Old Africa (email us at editorial@oldafricamagazine.com) The book is also available on amazon.com and amazon.co.uk

Here is an excerpt from the book, Among Whistling Thorns, where Joan Booth describes her arrival in Nairobi in 1922.

By this time we were travelling down to the Athi River, the last lap to Nairobi. The plain to the right of the line became empty of game, while they still crowded the area to the left. The animals already knew that this side was reserved for them. The other was dangerously near the town and was open to anyone with a licence to shoot. Even so, we soon learnt that leopards would come into the suburbs looking for dogs, considered by them to be a delicacy, and all over the town at night you heard the noise of hyenas overturning rubbish bins, and quarrelling over the contents.

We had to do a great deal of scraping before trying to wash the dust off and make ourselves presentable for arrival at the one platform station. Built of stone, it was quite a superior building and fairly seething with Indians, Somalis, Africans and Europeans.

Outside lay the wide avenue of Government Road, first the railway-houses built of corrugated iron and then the town. The majority of the shops were of iron and sported verandas across the side-walk, though there were a few stone buildings. At the further end of Government Road stood the Norfolk Hotel with trees in front where Roosevelt and that great hunter, Selous, had tethered their horses. It was presided over by a good looking, white-haired woman in a stiff-collared white blouse and long black skirt, known to everyone as Auntie, and, it was said, hailing from Texas.

The other wide street ran at right angles up to where the half-finished cathedral stood. Here was the newly opened New Stanley Hotel, a couple of banks, a cinema, a railway office built to look like a railway engine and the one-storied District Commissioner’s office. Both streets were very wide so that a wagon and eight span of oxen could turn in them. Scattered about behind was the Indian Bazaar smelling richly of spice and other things – well, there was no modern plumbing even in the New Stanley.

Nowadays Nairobi is a swarming city of great office buildings, hotels, noble and peculiar towers and Government offices, a bewildering place stretching far and wide. It has been blessed in having had a genius who planted avenues of flowering trees, and trained bougainvilleas of every colour to make carpets and festoons, while the centre of the roundabouts look as if they had existed from prehistoric times, with their great boulders and strange cacti.

In 1922 the town would have made a good set for a Western. Bounded by the wooden Ainsworth Bridge and a district called Parklands there was a big tree, its polished bole used by elephants as a scratching post, and beyond the Cathedral was the Hill where lay the hospital, the houses of the Government officials and the Club. This last, as it is now, should be preserved, complete with members, under a glass case.

These two main streets were busy, or so we thought then, with motors, many of them T-Fords, mule gharis and rickshaws. A deep concrete open drain separated road from the pavement. A year or two later we made friends with a man who would call in at the farm. He was a Swedish blacksmith named Nielson, who had come to Africa via New Zealand. A short man with tremendous shoulders and arms, he sported a long fair moustache, Viking style, nearly touching his chest and had a flattened nose. He was often drunk and had a tendency to spit on the floor, drunk or sober. His manners were beautiful and he never swore before ladies. He told how, when rather more drunk than usual, he had taken on the Nairobi police force. Having got his back to a wall and with one of those open drains before him he had only to wait until an askari dropped his eyes to step across it to knock him out. According to him the drain was quite full of askaris when the Irish police officer arrived. “Ah, that’s a grand fight you’re having,” says he, “and I think now we’ll just be getting along to the station.” Nielson agreed but said firmly that he would go like a gentleman. This he did, travelling alone in a rickshaw with the police officer following in another. He really was a very nice man. When Eric asked him how he came by his flat nose he explained he had shared a tent with a friend. He was sleeping soundly when the friend awoke to see a pink rat sitting on Nielson’s face and promptly flattened it and the nose, with a convenient bottle. This woke Nielson up, but there were no hard feelings.