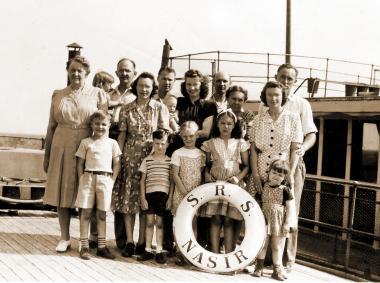 1946 In those days one could not always plan ahead and purchase ongoing tickets and connections. After our ship the Gripsholm docked in Alexandria, Egypt on a Saturday night, my father and some other missionary men disembarked and tried to clear the trunks and drums full of household goods through the hassling and haggling of the Egyptian customs officials. It took the entire day and at about 9 pm our American Express agents finally reached an agreement with customs.

We rode a bus from Alexandria to Cairo, arriving shortly after midnight. My weary and worn parents found rooms at the National Hotel in Cairo – but the bed linen was dirty so we waited while the hotel staff searched for clean sheets. Exhausted, exasperated, yet excited to be in Africa, we fell asleep at last and had a good night’s rest.

The hotel served half cooked bacon and eggs in the morning. My parents returned the food to the kitchen for final cooking, having been warned as young missionaries never to eat anything half-cooked or risk getting ‘Egyptian Tummy.’

Cairo became home for 16 long days. Since Dad was well-dressed and white, beggars on the street called out to him, “Hey, Yankee! How many millions of dollars do you have in the bank?” The condition of Cairo’s poor contrasted sharply with the wealth in the tombs of the great Pharoahs.

Finally the wait was over my family of five embarked on a month-long trip on the Nile River heading for Mwanza, a town on Lake Victoria – the source of the Nile – in Tanganyika Territory. On our journey we changed modes of transport 12 times – river boats, trains, buses, taxis and barges.

We crossed the Nubian Desert where mirages disguised the true terrain. We traveled in special sand-tight train cars, which provided respite from the torrid heat. Due to the cataracts along the great length of the River Nile, we had to keep changing our means of transport, each time having to off-load all our humble earthly belongings.

I remember one time when Mom and we three children were already on the train, which was slowly pulling out of the station with no father/husband in sight! Dad was still trying to purchase tickets in a strange land using a strange language. Mom was left alone with us kids, the baggage and no tickets or money! In desperation and despair Mom cried out to God for help – and soon we saw dear Dad running alongside our train cabin, trying to grab the bars of the moving steps to board just before the train picked up speed.

We traveled onward through Sudan, watching the people along the way – some with painted bodies and scant clothing.

The heat and humidity made the trip memorable, and to make things worse I came down with the mumps while we were still navigating down the Nile.

We made a portion of our journey on board the SRS Nasir, a riverboat with a great wheel that churned up the waters of the Nile. Behind the boat they had attached barges, which carried cargo.

The photo that accompanies this blog shows the missionary party traveling on the SRS Nasir. I am the little girl in the front on the right, at five years old enjoying my first trip in Africa. On the far left is Dr Virginia Blakeslee. My Dad Hap Donner is next at the back holding my sister Marlowe (three years old) with my Mom Betty next to him and my brother Calvin in the front on the left. Next come Dick and Joyce Hightower with their two boys, another missionary couple, possibly the Lincolns, with two girls and then Ed and Nellie Schuit.