New Book! For Love of Soysambu 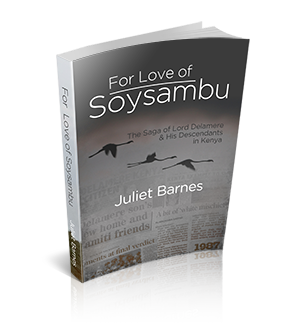 In this new book Juliet Barnes traces the history of the Delamere family in Kenya. She starts the story over 100 years ago when Lord Delamere, Hugh Cholmondeley, the Third Baron, went on a hunting expedition in Somaliland in 1891, followed by more trips. In December 1896 he mounted a larger exploratory trip through Somaliland, arriving in Kenya in 1897. Lord Delamere married Lady Florence Cole in England in July 1899, and took her to Kenya later in the year to collect bird specimens for the British Museum. On this trip they first saw Lake Elmenteita, pink-rimmed with thousands of flamingos. Little did they know then that the land on the other side of this soda lake would later become their Soysambu ranch. Lord Delamere returned to settle in Kenya in 1901.

The book goes on to tell the story of how Lord Delamere was instrumental in developing the agricultural backbone of modern Kenya, planting wheat at Njoro, importing sheep and cattle, and later interbreeding them with hardy stock owned by his Maasai neighbours.  After Lord Delamere died in 1931, heavily in debt, his son Tom became the next Lord Delamere, the Fourth Baron. Tom, raised by relatives in England, didn’t return to Kenya until after World War II, and worked hard to make Soysambu profitable. Tom was committed to Kenya succeeding as an independent nation and took Kenyan citizenship, as well as maintaining a friendship with Mzee Jomo Kenyatta, Kenya’s first President.

When Tom died in 1979, his son Hugh became Lord Delamere, the Fifth Baron. Hugh continues to run cattle on Soysambu, which is now also a wildlife conservancy, with zebra competing for grass with Lord Delamere’s herds. The author, who lives on Soysambu near the Delameres, spent much time with Hugh doing research for this book, and her writing captures Lord Delamere’s self-deprecating humour as he reflects back on his family’s history in Kenya.  At times, it feels like you’re sitting on the veranda of Main House on Soysambu with Hugh and Ann, Lord and Lady Delamere.

The author also gives an insider’s perspective and humanizes the politically-charged court cases after Hugh’s son, Tom was imprisoned and charged with murder – twice.  Having sat through much of the second court case with Hugh and Ann, Juliet Barnes is uniquely qualified to tell the story of the Delameres and their love of Soysambu. Lord and Lady Delamere, Hugh and Ann, read the newly-published history of their family.

Old Africa is the publisher of this well-written history, and even if it sounds self-serving, we recommend this book with its balanced narrative of Kenya’s history and the role of the Delamere family.