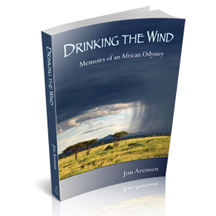 Drinking the Wind: Memoirs of an African Odyssey

Drinking the Wind traces the life of Jon Arensen who arrived on the African continent with his parents in 1946. Growing up in Tanganyika in the bush by Lake Victoria, Jon learned Kisukuma before he spoke English. He loved the outdoors and as a young boy he helped feed the family with his shooting skills. But he couldn’t grow up in the wilds of Africa forever and he went off to boarding school in Kenya to study and learn more about the wider world. After university in the USA, Jon returned to Africa as a teacher at Rift Valley Academy before moving to southern Sudan in 1976. He and his wife Barb surveyed the languages of southern Sudan for the Education Ministry before settling among the Murle people at Pibor Post where they learned the language and culture and translated the Bible into the Murle language. The author’s love for Africa oozes from every page of this book, which abounds with adventures of all kinds in this memoir of a life lived in Africa.