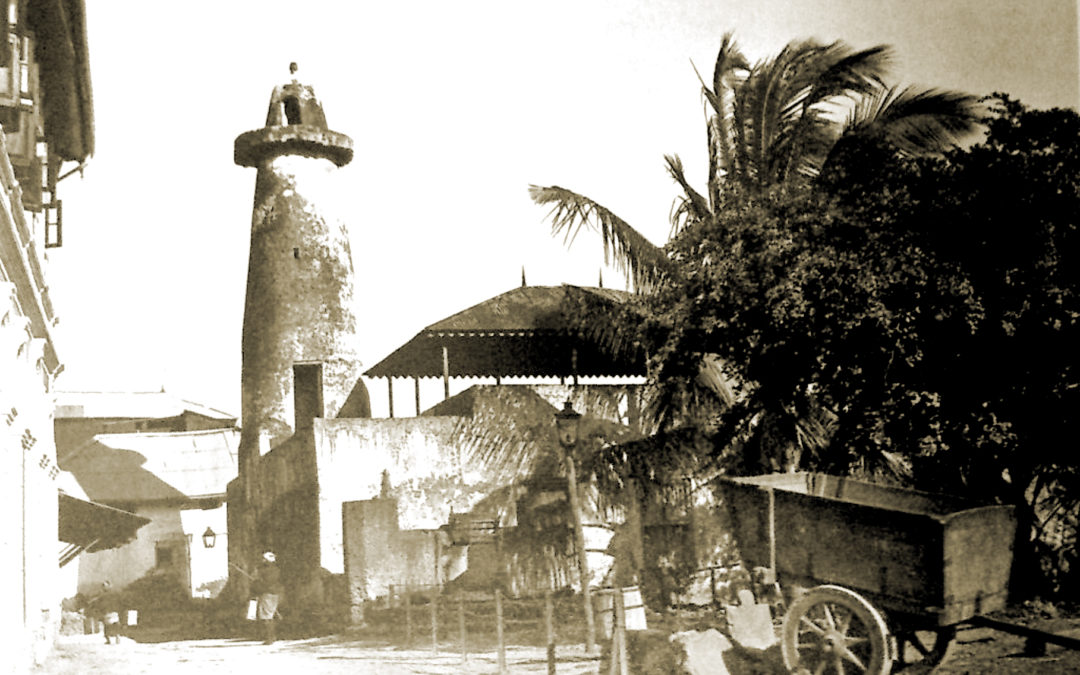 In the first decades of the twentieth century Mombasa was often a far from pleasant place to work or live in. The old town had a graveyard where leg and skull bones stuck out of the thin layer of soil. In the Old Harbour there was a large deep tank filled with shark oil, used to prevent marine growth in dhow hulls. During the northeast monsoon the stench from this tank blew across the town. The streets were stacked with mangrove poles that had lain in shallow water for months and smelt as bad as the shark oil. Some godowns were stocked with dried shark emitting a stink even worse than shark oil or mangrove poles. At the entrance to the old port, in Vasco da Gama Street, the lower storeys of some of the houses were stacked with bags of molasses. When it was particularly hot the molasses turned into a runny liquid and escaped into the street.

The town had no piped sewage disposal because the water supply coming from the Kwale hills (two-and-a-half million gallons) reached only the port, railway, industry and main thoroughfares, together with Mrs Lund’s steam laundry. The rest of the town acquired water mainly from wells and roof catchment tanks — large concrete reservoirs from which water was pumped into small tanks in ceilings. When there was a tropical storm, a common occurrence at Mombasa, the roof tanks overflowed and the water descended via pipes into the street where it would lie stagnating for days, providing a lovely breeding ground for mosquitoes.

In the dry season people carried water home from their business premises. There were many wells on the side of the main streets where women drew water in buckets or baobab pods. At one well there was an ox which trudged to and fro drawing water upwards via a cowskin. Unfortunately the wells and cesspits were often dug beside each other and this led to water being fouled. A well in front of the mosque on Vasco da Gama Street in Mombasa.

At every office and shop there was a cesspit. At the hotels the cesspits often filled and overflowed. When this happened a vehicle called the honeysucker came along and affixed a large and often leaking pipe through the building to the pits – in many cases through the dining room and kitchen. The honeysucker’s suction pump drew out the contents of the cesspit and this operation could take a whole day. As for Fort Jesus, which was a jail at the time, its sewage was collected in a large underground tank and released once a week into the harbour. The jailor in charge of this evacuation would choose to release the noxious contents at Saturday lunchtime, when many people lunched in Mombasa Club next door. The resulting effluvium rose from the sea to be caught by the wind and wafted towards the club.

Private houses had a thunderbox in their gardens inside a small shed looking rather like a sentry box and hidden behind a bush. The shed contained a seat with one or two holes, each over a bucket. Every night the sewage disposal operator would open a flap at the back of the shed and remove the used buckets, replacing them with clean ones. The buckets were then carried on the heads of the attendants to a lorry. When the lorry was full it was driven to Ras Serani on the seafront and emptied into the water. These lorries were called the Governor’s coffee pots after a mishap when one of the lorries collided with the governor’s Daimler car and emptied itself into the august vehicle.