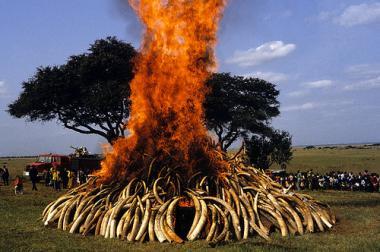 Before Africa had television sets, people entertained by holding dinner parties. To most white settlers in Kenya, missionaries were socially unacceptable whereas White Hunters were highly sought after for these dinner parties.

This social scale was a serious indictment of the class system and was no reflection on the quality of those rejected or of those chosen. The missionaries would probably be relieved they were not called upon to have their good work interrupted, even for one evening a month.

Before World War II, East Africa was ‘The Place’ to which European royalty went on hunting expeditions. Such expeditions suffered a decline in royal patronage after the war, but unfortunately for the wildlife of Africa, nouveau riche from the USA who had survived the Great Depression, showed up determined to shoot the Big Five.

The Kenyan White Hunters were mostly European settlers of UK origin, but with a mix of others with origins in Austria, France, Belgium and Italy. These were the days when the cry of, “Boy, hand me my buffalo gun,” echoed through the bundu as the African tribesman gun-bearer served his Bwana. This cry was soon to be replaced by “Harambee,” Jomo Kenyatta’s call of, “Let us all pull together and build a nation.”

The strange fact was that these professional hunters who slaughtered so much wildlife, were in other respects not cruel persons. But the fact remains that these professional white hunters chose to make a living by hunting wildlife for sport – wildlife, which even then the conservationists warned would soon become endangered, with some species even being exterminated. Now it seems unbelievable that such men could regularly witness such sad sights as a tiny orphaned elephant nuzzling the carcass of its dead mother and keep on hunting. I must admit that at that time my best friend was one of the most famous of white hunters.

Morally one felt it would be more acceptable if the animals had more of a sporting chance – if there was some possibility the hunted animal might turn and kill a hunter or two. A white hunter in Africa would be more likely to meet his end by being run over by a bus than he would by being killed by the animals he was killing.

They justified this slaughter, saying the income from the expensive hunting licenses to kill animals paid Kenyan wardens and guards to protect the game in the parks. The hunters also said their victims were animals outside the parks, which were killing cattle or destroying the villagers’ crops. Another justification for their killing of wildlife was an appeal to those who believed in the literal translation of the Old Testament that God had created the birds of the air, the fish of the seas and all the animals of the world to be under the dominion of man, so the argument ran that man could do as he wished with these beasts, including killing them for fun.

After the hunting ban in 1977, I had the privilege of taking thousands of clients on photographic safaris for which clients paid a fraction of the price the white hunters’ clients paid but which in total amounted to a greater sum. But this did little to stop poaching as the money went straight into the hands of corrupt leaders who managed to maintain control of some of the game parks’ income.

Even on photographic safaris, we had our own share of adventure. Arriving at Mara KT 10 campsite, late one afternoon, with 20 Israelis on safari, we out-spanned our eleven double tents in a 50-foot diameter circle. I awoke at dawn to discover two female lionesses each with about half a dozen cubs asleep in the circle, and I thought I heard two different male lions roaring as they circled the perimeter, although my hunter friends told me that it was extremely unlikely that there were two males. Despite saucepan banging and shouts from heads striking out from tents, the two prides only casually wondered off at midday.  For the six hours of our enforced containment none of us dared leave our tents even though many of us were bursting for a pee.

The era of White Hunters has a happy ending. Thanks to conservationists like Armand and Michaela Dennis, the Adamsons and many, many more, a change of mindset was eventually achieved. After the hunting ban, many of the professional hunters turned in to conservationists and became famous game wardens.

Sadly, however, poaching mainly for ivory and rhinocerous horn has spiralled out of control. It is now predicted there will be no wild lions left in Africa in sixty years time and the world will have to be content with seeing such species as lion, leopard, rhinocerous, buffalo and elephants in private game parks and zoos.