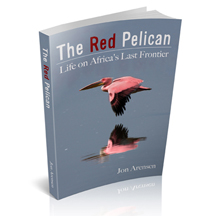 Here’s a review of one of Old Africa’s most recent titles, Red Pelican.

Houghton College is pleased to announce a new book by professor emeritus Jon Arensen.  The book, “The Red Pelican:  Life on Africa’s Last Frontier,” is the third in an unofficial trilogy by Arensen about the South Sudan.  It follows the work and ministry of Dick Lyth, British military officer assigned to fight against the Italian army during World War II.  After the war, he was District Commissioner for the Sudanese government, living with the Murle people and learning their language and culture.

Dr. Paul Shea, professor emeritus of missions at Houghton College writes, “[I] just read the book for a second time… It is loaded with significant information and some exciting drama. Arensen’s trilogy has opened windows on one of the least known parts of Africa. A naturalist would relish the references to wildlife. A geographer would go back to her maps and check out the landscape. A missiologist would compare notes with some of Africa’s past greats. Adventurers and romantics can find little nuggets of delight.”

“I was able to work with Dick’s family and use his private journals to really understand what challenges he faced on a day-to-day basis, along with various victories, great and small,” explained Arensen.

Arensen has spent much of his career working in the same Sudanese region, and credits Lyth with opening the doors of communication with the Murle people.

Though classified as history, the book reads more like a novel than a historical account. J. Brady Anderson, Former U.S. ambassador to Tanzania and administrator of the U.S. Agency for International Development states, “This book is a great read – full of adventure, love and war.  The author’s deep knowledge of this isolated part of the South Sudan, its culture and history, enable him to draw the reader into the story as a participant rather than an observer.”

The title of the book comes from the Murle name given to Dick Lyth:  Kemerbong, meaning “red pelican.”  Arensen writes, “I first heard of Kemerbong when I visited the Boma Plateau in 1976. The highland Murle and the Kichepo were fighting and there was serious unrest in the area.  However, both sides said they would stop fighting immediately if Kemerbong came back.  They still remembered the peace ceremony that had taken place in the 1940s with Kemerbong accepting the role of peacemaker.”

Arensen was raised in Africa and thus introduced to African languages and cultures from a young age. Early in his career, he taught in Kenya and then moved on to Sudan, working under the Summer Institute of Linguistics (SIL) as a linguist surveying various languages. His research resulted in a master’s degree from Central Washington State University. From there, he spent eight years living with the Murle people in eastern Sudan, studying their language and culture. During these years, he attended Oxford University, earning an additional master’s degree as well as a D. Phil. in Social Anthropology. His work with the Murle people continued until a complete New Testament was published in their language. After serving as anthropology coordinator for SIL in Africa, covering 24 countries and training new personnel as they entered, he became professor of anthropology at Houghton College. During his time at Houghton, Arensen has led numerous student groups to Tanzania as part of Houghton’s off campus programming.

The other two related books written by Arensen are “Drinking the Wind” 2010 and “Chasing the Rain” 2011.  All three books are available at www.amazon.com.