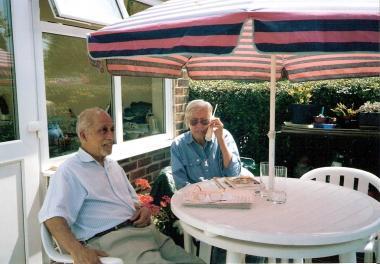 We were all saddened to receive the news of Cynthia Salvadori’s passing in late June. She was a good friend and regular contributor to Old Africa magazine. We will have a tribute to Cynthia in our August-September magazine written by Neera Kapur-Dromson. But here’s another tribute written by Old Africa author Judy Aldrick. We’ve also included a photo of Cynthia visiting Old Africa reader Mervyn Maciel in his “Manyatta” in Surrey, UK, in 1993. Cynthia will be missed greatly by all of us who knew her.

The news of Cynthia Salvadori’s sudden death in Lamu on Monday 27th June, at the age of 76? , will come as a sad shock to her many friends.

She will be remembered chiefly for her books about the Asian Communities and the Asian pioneers in Kenya.  She chose to draw attention to these communities at a time when their history had been largely ignored and their contribution to Kenyan society was underrated.  Her book ‘Through Open Doors’ published 1983  opened the eyes of many to the intricacies of the various religions and differing peoples of the Asian peoples of Kenya.  The meticulous research and remarkable assembly of facts made this book an essential reference book on the subject, which would be hard to improve on.   She went on to collect the histories of the Asian pioneers in a number of books ‘We Came in Dhows’,  ‘Two Indian Travellers’ and ‘Stories of the Punjabi Muslim Pioneers in Kenya’.   Her hall-mark was always exact research with plenty of references, indexes and illustrations.  She was a perfectionist in her work and demanded a lot from the publishers and editors, with whom she worked.

Besides her interest in the Asian communities she also had a deep commitment to the nomadic peoples of the NFD, who lived on the borders with Ethiopia in an area that is amongst the poorest and least developed in Kenya.   She spent time in Marsabit and Moyale and was never happier than when riding her mule and collecting anthropological notes amongst the Borana people.  She later wrote a book about the Borana and also helped compile a dictionary of their language. She wrote an extraordinary number of books on a wide variety of subjects.  She loved to write, contributing to magazines, fascinating articles on subjects as diverse as sea urchins, the mysterious graves at Ishakani, or Borana circumcision rites. But as she often told me, she did not write for money, she only wrote on subjects that interested her and because she wanted to.  Her father Max Salvadori, also a prolific author and a former professor at Smith College, Massachussets, had told her that important maxim for success as a writer, at a young age. Cynthia had a great admiration for her father, but also inherited an artistic talent from her British mother.

Cynthia had a deep love for Kenya and came from an Anglo-Italian-Kenyan heritage.  She was conceived in Kenya but born in the Uk and was always particularly proud of her mother’s ancestor Jack Haggard a former British Consul in Lamu.   He was the brother of the famous writer Rider Haggard.   Her father, who had been imprisoned by Mussolini for his anti-fascist views, came to Kenya as an exile from Italy in 1932.  When the Second World War broke out in 1939, he returned to Europe to fight, while Cynthia and her mother went to the United States where they eventually settled.  But as soon as she could, immediately after finishing university, she returned to her African roots.

Cynthia was a nomad who never liked to settle long anywhere.  She loved to travel and needed the continuous stimulus of a wide variety of people, cultures and religions.  She wore her erudition lightly, but was immensely knowledgeable and well read on any number of subjects.  Amongst her passions could be listed cats and horses, crossword puzzles and detective novels.  She cared little about what she wore or luxuries of any kind, and always travelled light – never going anywhere without her notebook, camera and more recently her trusty computer.

Cynthia possessed extraordinary determination and strength of character, at the end of her life she refused to have an operation on her arthritic hip, but suffered it with great stoicism, never complaining.   She also had the gift of friendship and sympathetic conversation and was most generous to all those she befriended.  She was a person of great value, her multi-facetted talents will be difficult to replace or forget, her like ever to meet again.  Cynthia will indeed be sadly missed.