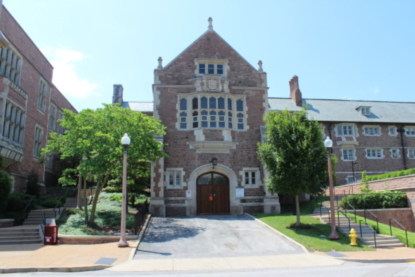 I always enjoy receiving feedback and discovering new information.  It makes writing about East African history all the more worthwhile for me.

Imagine my surprise when several years after my book about Sir Northrup McMillan had been published(Judy Aldrick, Northrup: The Life of William Northrup McMillan, 2012, Old Africa Books) I received a mysterious message on my Linked In network.  A retired lawyer, Mike Cronan, wished me to get in contact as papers relating to Northrup had come into his possession, which he thought might interest me.  I sent him my contact details.

A week or so later a parcel of papers arrived in Kent from the USA.  It was the details of a lawsuit brought in 1929 by a McMillan relative against the St Louis Trust Company and Lady Lucie McMillan, Northrup’s widow.  Mike Cronan had been researching the life of a prominent Missouri lawyer and politician called James Reed and had come across the information amongst his papers. Reed had represented Lady Lucie in the case brought against her. Cronan did not include the McMillan affair in his book about Reed, as after Reed had filed a preliminary motion, the case was dismissed.

Alice Warfield, a cousin of Northrup, brought charges against Lucie McMillan, claiming that she had been defrauded of her inheritance.  William McMillan, Northrup’s father, had died in 1901 a very wealthy man and left his fortune to his wife and only son, however, with certain strings attached. He was a cautious man and did not want his wife and son to spend his hard earned money all at once, so he set up an investment trust called the St Louis Trust Fund Company to provide a steady income. In his will he further stipulated that if his son Northrup died without issue then the estate would pass to his two brothers, James and Hugh, and after them to their children.

Eliza McMillan, Northrup’s mother, died in 1915.  She made generous bequests to the hospital and University in St Louis and left small legacies to various friends and relations. Northrup inherited the remainder.  William Keeney Bixby long time business partner and close family friend acted as trustee for McMillan senior’s will and managed the St Louis Trust Company and the family finances, which prospered greatly over the years. Washington University in St Louis; a view of McMillan Hall built from a bequest from Northrup’s mother as an early facility for women students. The photograph on the right shows McMillan Hall, which now forms part of the University Department of Arts and Sciences and specialises in African and African American Studies.

In 1919 Alice Warfield signed a document agreeing to forego half of her future share of her inheritance in return for a down payment of US$25,000. This document stated she and her husband had made this decision, as she did not wish to wait until Northrup died. Northrup then bought half of the future share from his cousin. Some other members of the family made similar arrangements.

Northrup died in 1925 without issue and the terms of his father’s will came into play. Alice Warfield received US$372,000, half of what she would have received had she waited a few more years. Disappointed and feeling cheated out of her full inheritance, she decided to try and repudiate the agreement alleging she had been induced to sign the document without full knowledge of the facts. Her chief argument was that she had not been told that Northrup and Lucie could not have children and had she known she would not have signed the document. She went public and her allegations received a great deal of publicity in the local press.  However, in the end she failed in her challenge. Previously she had brought another suit against Bixby and the St Louis Trust Company charging that the estate had been undervalued in 1919 and accused Bixby of faulty accounting.  Errors were found which after distribution gave her some extra money.

Lucie McMillan never appeared in court to plead or give evidence. However, it cannot have been a pleasant time for her as the case took over a year before being dismissed. Had Alice Warfield won, Lucie would have been left much impoverished, as other heirs would then have made claims.

It is interesting to speculate why Bixby induced Alice and other members of the family to forego part of their inheritance in return for a cash payment. It was a clever way to remove money and investments from a restrictive trust fund, but why was it done?  It seems unlikely that Bixby embezzled the funds for himself as he was wealthy in his own right and seems to have been a kindly and honest man, dedicated to the interests of the McMillan family. Bixby might have wished to help Alice and her husband so they could buy a house or start a business. Perhaps they just needed money at that time.

But the most likely explanation is that it was done for Northrup. Northrup was not business minded and none of his ventures ever turned in a profit. His Africa projects required a huge inflow of funds, which he expected Bixby the family financier to provide. He may have asked Bixby to find a way to remove lump sums from the trust so he could increase his cash flow and service his many commitments. At the time of his death aged 52, the McMillan fortune was estimated at over US$8 million dollars, despite his extravagant spending habits. His father’s will had tied up the estate to ensure it would remain within the McMillan family, and go to his nieces and nephews, as he probably knew that Northrup was unlikely to have children of his own. There was no provision for Northrup’s wife in the original will.

Mike Cronan believes that Northrup was concerned about this and wanted to provide for his wife in the event of his death and so asked Bixby to devise a scheme to remove money and property from the trust. These funds would then remain outside the terms of McMillan Senior’s will. Northrup’s health was poor and he expected to predecease Lucie by some years. This proved to be the case as Lucie reached the ripe old age of 90 dying in 1957 surviving her husband by more than 25 years. By this means Northrup left her sufficient money to live on.

Northrup drew up his personal will in 1915 when he left to join the British army and fight in WWI. In it he left everything to his wife Lucie, provided she survived him by one year. In 1925 Northrup’s personal estate held in USA was estimated at US$ 121,000, a fraction of the McMillan millions held by the Trust Fund Company. This was eventually paid out to Lucie in 1934, nine years after Northrup’s death. Fortunately, Lucie was not reliant on this money alone as Northrup had properties and assets in England and Kenya, which were not subject to US jurisdiction or tax laws, but savings had to be made. In 1944 when the St Louis Trust Company was finally wound up, Lucie inherited more funds, which helped her live out her old age in comfort.

The case throws up a number of interesting questions, especially in this day and age, when feminist issues are in the spotlight. Was Alice Warfield’s missed fortune her own fault or was she unduly influenced by pressure from Bixby and possibly her husband and not given all the facts? Her attempt to overturn the agreement she had signed, failed, but the half share she received was still a large sum of money. It was a fascinating case, which caught the public eye having all the ingredients of fabulous wealth, society women at loggerheads and a whiff of dodgy dealings. In the end justice seems to have been done and the widow received her rightful share.  It was Kenya which benefited most from the experimental businesses and projects financed by Northrup using the McMillan fortune.

With thanks to Mike Cronan for his research and photographs.