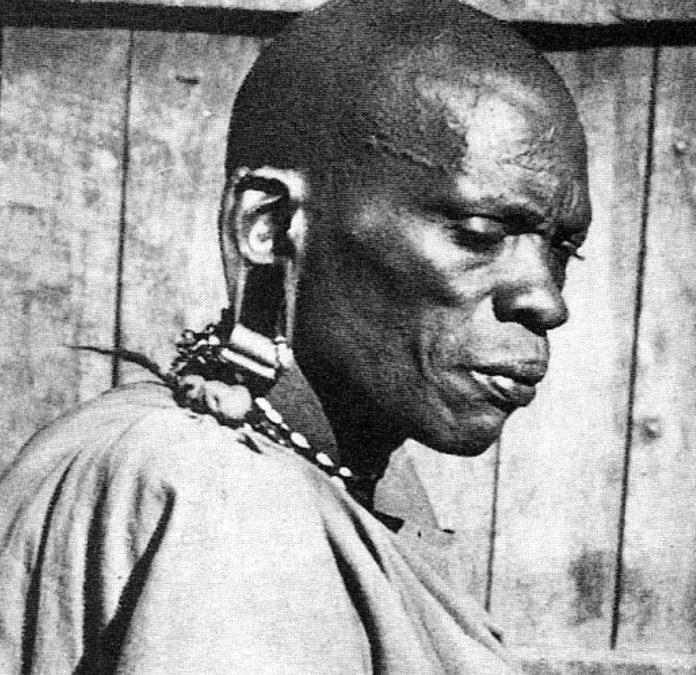 Elspeth Huxley recorded some stories of the workers on the farm of her mother, Nellie Grant, which give a fascinating insight into the history of Kenya. The Grants’ first farm was near Thika and then they moved to a farm at Njoro.

Came from Gethumbwini, Thika. At the time of the first famine his mother went to Ukambani to get food, but never came back. His father died (when Njombo was 12 or 13), then his brother, then his twin brother and his sister. They had no food and no one to look after them and there were two small children, so Njombo took them to an uncle who sheltered them. He then went to Nairobi to work at road making and dug building stone from a quarry. Thereafter he went to Thika to work as a driver, having been taught by a Dutchman. His job was to drive the wagon from Thika to Nairobi. He saw his first Europeans in 1912. He was sent to Blue Posts Hotel to fetch Elspeth, Mrs Grant’s daughter. His clan rejected him because he thought his father had been killed, so he ran away to Kiambu and went for one term to the Africa Inland Mission school at Kabete, and then to the Roman Catholic school. He returned to his village to avenge the poisoning (he thought) of his brothers and his daughter. He heard Mrs Grant was going to Njoro and was looking for people to follow her. He walked to Njoro and Mrs Grant promised them all gardens, saying they were to work alternate weeks and to get posho. He brought his wife and three children by train, but had no house, only a wooden shelter. He would kill a goat three or four times a year and his wife went to market every Sunday to buy sweet potatoes, ripe bananas, and occasionally rice.

Njombo who came to Nellie Grant’s farm in Njoro from Thika.

He was the eighth son of his father, Kinoko, who lived near Kikuyu station. In the famine all his father’s wives died except for Karanja’s mother. His father went to work for Charles Clutterbuck who then moved to Njoro, taking Karanja with him. He learnt to drive oxen and a plough and drove a tractor for a year. He came to Mrs Grant’s farm with his father. He was left to look after the house and the chickens when she was in England. When she was away again Karanja went to school at Unga Ltd and learned to read and write. He decided to marry but his wife’s children died so he got another wife. In 1935 Mrs Grant paid 10 shillings for him to go up in an aeroplane.

He was a small boy when Mrs Grant first came from England. He became the one who led oxen in front and then went to turn the coffee beans to prevent overheating. He remembers Elspeth [Huxley] with a stick representing a gun, saying she was going to shoot Germans during the war. He went to Njoro with Mrs Grant and his father because there was plenty of land there where they could keep cattle and goats. They had not had much land in the reserve. There was much forest with large trees and wild animals such as leopards, buffalo and wild dogs. He returned to Thika to fetch a girl to marry and paid a dowry of two heifers, a bull and four goats. This was the year of the earthquake [probably in 1928]. The Europeans in the area were Lindstrom, Petrie, Graham, Watenga and Clutterbuck. The Dorobo in the forest came to barter honey but they had no means of speaking to the Kikuyu.

He was born in 1913 at Thika. In 1923 his father decided to go to Njoro with Nellie Grant to get more land and grazing, even though his mother did not like the idea. Mbugwa was at school at Gethumbwini and did not want to leave so he ran away and hid in an Indian duka with his sister. However, he was found and had to accompany his father to Njoro. His father’s wives didn’t really like it as they could not grow the food they were used to – maize, sweet potatoes, sugar cane and yams. They returned to the reserve every six months to look after the shambas left behind and to get their favourite foods. In 1930 Mbugwa became a kitchen toto for Mrs Grant. His wage was three shillings a month. He discussed the bride prices, which varied from district to district. In the 1950s they were 2800 shillings or 440 goats.

He came from Chura near Kikuyu. He worked on Petrie’s farm at Njoro. There was a school on Graham’s farm and he used to go every evening to learn. He can read and write. He learned how to repair ploughs and Mrs Grant made him a fundi [handyman] at 30 shillings a month. He had his ears cut but got them sewn up again because they looked ridiculous with European clothes. He followed the customs of his fathers until about 1926 but then he started to hear about God. He named the circumcision ages: 1930 Munbeleyo (forbidden dance), 1931 Kabungu (button, used as ornamentation that year), 1932 Kohango (stick for beating locusts), 1933 Kenyabus (they came that year), 1934 Ndururu (5 cents), and 1935 Conga (to wean).