Sweet Potatoes for Thanksgiving in Tanganyika 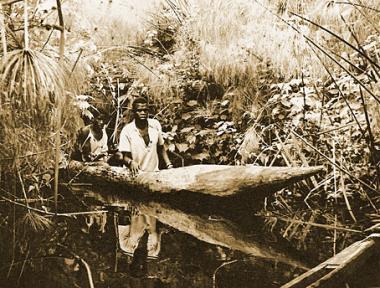 Tomorrow is American Thanksgiving, a holiday to remember all the good things God has given to us, and normally celebrated with family around a table groaning under a turkey dinner with all the trimmings. I’m in the USA this year and I’ve bought the turkey and my wife is working a day ahead to make the meal special. I’ve spent more Thanksgivings in Africa than in America. And my dad always told the story of the Thanksgiving in the 1950s in Tanganyika when they only had sweet potatoes. But let him tell the story. I found this manuscript recently in a box of Dad’s letters and papers, which had been in storage.

As Americans in Africa, we still celebrated Thanksgiving on the last Thursday of November. We lived at Kahunda, a mission station on the shores of Lake Victoria south of Mwanza. A government boat usually stopped at our tiny dock once a week, but it had failed to arrive this week and we were out of food.

We went to bed on Thanksgiving eve wondering how our family would be thankful for sweet potatoes.

The next morning I woke up early and went outside. A young boy came down the trail. “Wangaluka Baba – uli mhola?” he greeted me in Kisukuma. “The night has turned my father. Are you at peace?”

Then he told me he’d had just seen a flock of guinea fowl on the edge of the forest. I hurried back into the house for my shotgun. The long grass in the area made it difficult to see and shoot guinea fowl. But as I arrived, a large bird hopped up on a stump. I fired and the bird dropped dead. I picked it up and marched back to the house rejoicing.

As I stepped outside another boy near the lake asked if I wanted to buy fish. He had just seen a fishing boat glide up on the sandy beach. I gave him some shillings and half an hour later he returned with a nice string of lake fish. Things were looking up for our Thanksgiving feast.

Shortly after the fishermen paddled away in their canoe I heard a bushbuck barking near the lake. I grabbed my .22 rifle and went down to the bushes by the lakeside. When the bushbuck barked again, I spotted him and killed it with one shot. Our gardener heard the shot and ran to help me drag the buck into the backyard. We skinned it and divided the meat with our African neighbours. We had a kerosene refrigerator, so we stretched the meat for several weeks.

While I had been stalking the bushbuck, a man had stopped by our house and asked what he could do with a bag of white wheat flour. His friend had gotten it from an Arab-shopkeeper by mistake and he didn’t know how to use it. My wife, Esther, bought the flour from him. Before she had finished the transaction, someone else came to the door to sell tomatoes.

Thanksgiving had arrived on time! We only had sweet potatoes to begin with. Now we had fish from the lake, guinea fowl from the forest, white flour from an Arab shopkeeper who had made a mistake, a hefty bushbuck to keep us in meat for several days and a basket of tomatoes

Truly it was a Thanksgiving to be thankful for.

Have a great Thanksgiving.