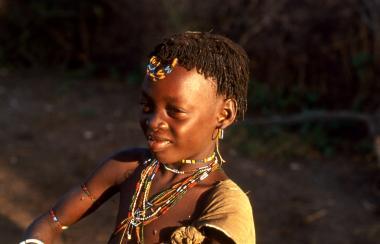 Translation of the Scriptures into another language is an intriguing exercise. The translator is challenged to find terms in the receptor language for such key Biblical concepts as Holy Spirit, cross, Satan, evil spirits, savior, prayer and God. If these key terms do not carry an accurate meaning, then the ultimate translation will not be of much use. The finding of key terms is even more challenging when the receptor culture and language are far removed from that of the Bible

The Murle people of South Sudan are a pastoral people who live on the flood plains near the Ethiopian border. My wife Barb and I moved there in 1975 to begin the process of learning their language and translating the Scriptures. We eventually trained a translation team of Murle men and began looking for key terms. I soon discovered that the traditional religion of the Murle focused on the worship of the high God. They referred to this God as Tammu. This word had several other meanings such as rain and sky, but linguistic suffixes helped make it clear that Tammu referred to a God with anthropomorphized characteristics.

There were a number of factors that made this term attractive. Tammu was the original creator of the world and of the Murle people. The term Tammu referred to the supreme God only – not to a lower pantheon of spirits. Murle people prayed directly to Tammu in time of need such as drought or famine. The people honored Tammu, but at the same time they feared Him in a respectful way. The term Tammu was their term for God. So by using Tammu in the Bible we would be showing them how to have a relationship with the God they already knew about – but only understood to a limited degree. The gospel would not be seen as an outside religion to the Murle, but would be accepted as the answer to their religious search.

My Murle translators agreed that this term was ideal and we incorporated it into the new translation. Eventually the church grew and Murle people began reading the newly translated Scriptures. But I noticed that the Murle Christians in church prayed to Jook and also sang Christian songs praising Jook. I asked my translators about the term Jook. The said it was just another term for the same supreme God. I was initially puzzled by this world. I eventually discovered that the word Jook came from the Dinka tribe that lived to the west of the Murle. As the Murle conquered sections of Dinka territory, they married Dinka women and over time they had incorporated some of the Dinka religious terminology. I looked into the use of the term Jook in Dinka culture and found that is was a vague term that covered the whole spiritual world. Jook was a capricious power. It was not nearly as good a word as Tammu. The Murle translators agreed and for the next few years we continued to use the term Tammu exclusively in our translation of the Scriptures.

Civil war forced us to leave Sudan and we finished the first draft of the New Testament in Kenya. Eighteen books were published and sent back to Sudan. The Murle church flourished during the following years and eventually there were over sixty churches located in the flood plains and large Murle congregations in various cities in the north. Seven years later I was invited to Khartoum by the Murle church to finish checking the Murle scriptures. I found hundreds of Murle Christians singing, praying and praising God. But all of them were focusing their worship on Jook. The only time I heard the word Tammu was when they read the Murle Scriptures.

Was I so wrong over all those years? Or were these people simply making a bad choice? The term Jook had all kinds of negative connotations when compared with the Dinka understanding of the word. Would the use of Jook eventually limit the Christian faith of the Murle? Should l leave the term Tammu in the Murle Bible? What should I do?

After much prayer and thinking I came to the conclusion that the Murle people had made their choice – Jook. It was their language and their church. The Scriptures in which the term Jook was embedded would teach them the Christian attributes of God. I turned on my computer and one by one I replaced the term Tammu with the term Jook. The cover of the printed Bible now reads Zooz o Joowo – The Word of God.