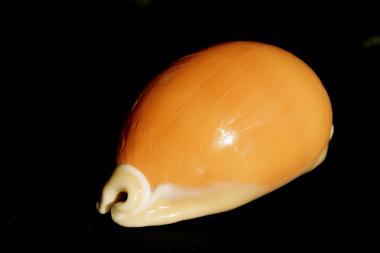 Barb and I met at the Rift Valley Academy where we were both teachers. I had the joy of introducing her to the beautiful country of Kenya. We went on safaris, hunting trips, hikes and walked the sandy beaches where Kenya touched the rolling waves of the Indian Ocean. We were eventually married in the RVA chapel with my father performing the wedding and the RVA choir providing the music.

For our honeymoon we rented a cottage at the coast. While walking on the white sugary beach a young Kenyan boy approached us and offered us an unusually shaped seashell. I had been collecting shells for many years. (This was back in the time when seashell collecting was an accepted hobby.) I looked at the shell carefully and realized that it was something special. I had never seen anything like it before. It was in the volute family and had a symmetrical spiral shape with pink, brown and black stripes. The boy offered to sell it for 20 shillings (about 3 dollars). I gladly paid him the asking price and he went away pleased with the sale.

After looking in several shell books I was finally able to identify my new shell as a lyreformis – a rare deep water species. A pristine shell such as mine was priced at $400 – enough to pay for our whole wedding and honeymoon.

Over the ensuing years Barb and I continued to collect seashells with an emphasis on collecting cowries. These smooth shiny shells come in many colors and sizes and over time we owned over 60 separate species. Most of these cowries we found on the open coral reefs at low tides and we only took those where the snail had already died. Occasionally we would stop at a seashell shop in Old Mombasa Town and the Indian proprietor would show us his merchandise. He would display the more common shells on a glass counter top. Then when the shop was empty of other customers, he would reach under the counter and pull out a tray of “specials”. Sometimes he would have a cowrie that was not in our collection and we would dicker over the price. We would only purchase a cowry if the price was within range of our limited finances.

On one visit to the shell shop our proprietor friend was very secretive and in a whisper he asked if we would like to buy a golden cowrie. This famous species of cowrie was only known to us from books. Golden cowries were extremely rare and therefore expensive. They were only found near a small island somewhere in the South Pacific Ocean – far from African shores. We shook our heads sadly, knowing that a golden cowrie would never be in our price range. Our merchant friend understood our dilemma. He then offered to show us a golden cowrie if we would pay him 40 shillings. We declined. It was lot of money just to look at a seashell, even if it was a golden cowrie. Then the merchant capitulated. He was so excited to have a golden cowrie in his possession that he wanted to show it off. He said we could see it without paying. He dug down behind his glass counter and came out with a small cardboard box. He carefully lifted off the cover and lying on a bed of white cotton was a real golden cowrie. It was gorgeous. The bulging back was a rich golden color while the underside was a rich creamy tone accented with purple teeth. It was a large perfect specimen and our Indian friend allowed us to pick it up and admire it from all angles. After a few minutes of ecstasy we grudgingly placed the golden cowrie in its box and it went back into hiding. Its value was well over $1000 and we knew we would never be able to own a golden cowrie.

38 years later Barb and I went on a trip to the South Pacific. I was on sabbatical from my teaching post at Houghton College and I wanted to spend some time learning about island cultures. During our three months of travel we visited New Zealand, Tonga, Samoa and Fiji. While in Fiji we signed up for a day trip with a tourist company. We were driven in a van from our hotel to the opposite side of the island. Here we visited an enactment of ancient Fijian culture. It was an excellent educational trip. I still do not understand how the Fijian men can stand and walk on red-hot coals without feeling any pain.

On our return trip the van stopped so the passengers could have a snack and Barb wandered into a local curio shop. She came running out and stated excitedly, “They have golden cowries!” I went into the shop and saw a locked glass case. Inside lay four golden cowries. Both of us just stood here and admired the exquisite shells. They were perfect. An Indian lady wearing a satin sari came over to us and politely asked us if we were interested in buying a shell. She unlocked the case and took out the cowries one after another. For the next few minutes we handled them and admired their color and smooth texture. They were all beautiful, but I was drawn to the largest one. I swallowed slowly and asked the price. She said, “Only $300.” I was surprised. The price was much lower than the one I had seen in Mombasa many years before. I asked why. Shell prices are based on rarity. The sales woman explained that they had been considered extremely rare, but recently a pocket of shells had been found near a small island north of Fiji. This find had flooded the market so the prices were down  – but probably only for short time. It made sense, but the price was still too high for me. Sadly we turned down her offer and started to leave the curio shop. The lady followed us and said, “For you $250!” Again I motioned in the negative. As we boarded our van she shouted “$200!” That figure tempted me, but it was too late. The river put the van in gear and we were off.

As we drove I kept kicking myself and thinking, “I really should have bought a golden cowrie”. I knew Barb was disappointed, but she had agreed that the price was too high for our budget. However, as we drove I kept thinking how it would be a special gift for Christmas – a real surprise. But how could I buy it without Barb knowing? More problematic  – we had already left the curio shop so it was too late. Back at the hotel I could not forget about the beautiful seashells. I kept thinking about a way to buy a golden cowrie without Barb knowing about it. But the shop was more than 60 miles from our hotel. Taking the time to drive back to the curio shop was too obvious and we only had one more day in Fiji. Eventually I went and talked to the matronly Fijian lady at the front desk. I explained my dilemma. She suggested I use the van driver who would be traveling past the curio shop the next day. I hesitated. It involved trust at several different levels. But I decided to go ahead with her plan. I put $200 in an envelope with a note to the Indian sales lady in the sari. I explained who I was – the American tourist who had admired the golden cowries. I asked her to pick out the largest of the four cowries, wrap it up and give it to the van driver. The van driver was instructed to first deliver the note and then receive the package. This he was told to give to the Fijian lady at the front desk of our hotel. Her job was to hide it in a desk drawer until I could pick it up.

All I could do now was wait – probably $200 gone forever. It was a long day. The next evening I stopped by the front desk. The receptionist smiled at me and slipped me a small box. I smuggled it to our bathroom and locked the door. There I opened the box. In it was a glorious golden cowrie – the very one I had chosen.

But now I was concerned about how to get it back to New York. I had been assured that it was legal to take the cowrie out of Fiji. But we were traveling through other countries like New Zealand and I was afraid they might confiscate my shell. So I told Barb I was going shopping. I hailed a taxi and had the driver take me to the UPS office. I showed them the golden cowrie and they cleared it through customs and wrapped it up in a bubble envelope.  Then off it went to my secretary at Houghton College.

It all worked like a dream. The golden cowrie arrived safely in Houghton within the week. At Christmas I kept the wrapped box under the tree until last. Barb was completely surprised. We have a glass display case in our living room. The golden cowrie now holds the position of prominence – surrounded by all the other lesser cowries. Our collection is finally complete.