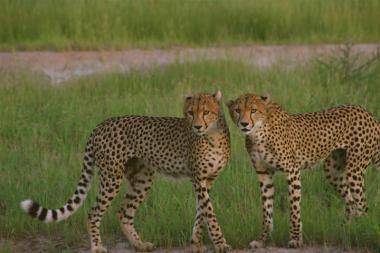 (I don’t have a photo of a greyhound so a cheetah will have to do.)

My adventurous travel spirit served me well during my high school days in Kenya and on into college. My best example is what I call the Greyhound story. After my sophomore year of college I was looking for a summer job to help pay for my schooling. I passed through Chicago where I stopped in to see a distant cousin. I asked her about jobs and she told me that the Greyhound bus company was hiring. They were looking for tour guides for their summer excursions around America. Having been raised in Africa, I did not know that much about America, but the job sounded interesting so I thought I would make an application. The following morning I took the train downtown to Chicago and approached the massive Greyhound depot. The building was a beehive of activity with people and buses everywhere.  I finally found the tourism office and walked in. I approached a harried looking man and said, “I am here about the tour guide job.” He leapt up off his chair and said, “You are late. The bus is loaded and ready to go.” He thrust a small briefcase into my hands and then escorted me out to a standing bus. I climbed up the steps and looked at 31 eager passengers – all awaiting their summer vacation. I turned to the manager and asked, “Where are we going?” In his hasty response he told me that I was booked to make a five-day tour around Lake Michigan. Then he stepped down and headed back to his office. I picked up the microphone and introduced myself as the tour guide. I informed the people that we were now beginning our five-day tour around Lake Michigan. They clapped enthusiastically and I sat down in my seat wondering what I had gotten myself into.

The driver put the bus in gear and we pulled out of the depot and headed south. Meanwhile I opened the briefcase and found a brochure that gave details about the trip around Lake Michigan. It mentioned the various towns and hotels where we would be staying. There was also a detailed map of our route. More importantly there was a guidebook that gave various information about the states of Michigan and Wisconsin. Since I had never been to Michigan or Wisconsin I started reading as fast as I could. It was essential that I knew something about the places we were going to visit. At least I had a driver who was raised in America and he would take care of the directions.

After about an hour I noticed that we were still heading south on a major freeway. Looking at my map I thought we should be going east, heading for southern Michigan. I walked up to he driver and quietly asked him why we were still heading south. He looked at me strangely and said, “You are the guide. I am new on the job. This is the first time I have ever been out of Chicago.” I immediately realized I had a major problem. I studied the road map and saw that we were definitely on the wrong road. So I instructed the driver to get off on the next exit ramp and we turned around and headed north. Now I watched my map like a hawk and we finally made the correct turn – finding the freeway that headed toward southern Michigan.

By late afternoon we pulled into the small town mentioned in the brochure and soon found our quaint hotel. I walked to the desk and booked in – fortunately they were expecting all 33 of us. I assigned rooms and the porters grabbed the suitcases. They later presented me with a bill – 50 cents for each bag delivered. I paid them out of a small hoard of cash I found in my Greyhound briefcase. I also discovered a special Greyhound checkbook. When the desk clerk presented me with a bill for $3000 dollars I wrote out a check for the amount and signed it. As I lay in my nice bed that night I was content. I had a real job. But could I pull it off?

The following day I loaded up my 31 passengers and we headed north. As we drove through miles of coniferous forests I would occasionally turn on the microphone and tell people what they were seeing. The guidebook was proving to be very useful and I sounded authoritative. But near noon we came to an unmarked Y in the road and I could not tell which road to take. The driver stopped while we discussed it and we decided to take the left road. It did not take us long to realize that this was not a main road. The road got narrower and soon overhanging trees were brushing the roof of the bus. But our Greyhound bus was a long vehicle and we found no place to turn around. Then we saw that our road went through a small tunnel under a railway track. Would we fit? The driver came to a stop, assessed the situation and then drove slowly into the tunnel. Suddenly there was a screeching sound as the bus wedged itself into the tunnel and we stopped suddenly. We got out to assess the damage. A number of the passengers also got out to help and we discussed what to do next. The driver tried to back the bus out, but it was firmly wedged in the tunnel. Then a practical passenger (probably an old farmer) suggested we let some air out of the front tires of the bus. We did so and this allowed the driver to back out the bus. The damage to the top of the bus was considerable and all the top running lights were broken. But the bus still ran so we loaded up and the driver drove backwards down the road for several miles until we found a side road and were able to turn around.

By now the passenger realized we were lost and they all started to help. They got out their maps and at every junction they would yell enthusiastically and tell the driver which route to use. It was a bonding experience. We were all in it together. My instructions informed me that we were to spend the night on Mackinaw Island. To get there we needed to reach Mackinaw City and take a boat to the island. The last boat left the dock at 5:00. It was essential we get there on time or we would not catch the boat. Because of the tunnel incident we were behind schedule so we tried to make up time. We arrived in Mackinaw City a little after 5:00 and I saw a pier extending out into the water. Tied up to it was a small tugboat. I stopped the bus and asked the bearded captain if this was the boat to Mackinaw Island. He said it was and indicated he was ready to go. So I motioned for the bus to pull in. All my passengers got to work loading suitcases onto the tugboat. There were few seats so everyone sat on the gunnels as the tugboat churned out into the vast lake. It was a big adventure for everybody and I was relieved hat we had gotten to the boat on time.

But as we pulled out across the bay I noticed a large ship moored at another pier. It was much nicer – a luxury liner. Only with our eventual arrival on Mackinaw Island did I discover that the big ship was the one we were supposed to take. It had been waiting for us. I was in serious trouble with the owner of our big ship since his boat was part of the package tour. But we made it to the island and my passengers were quite pleased with the entire adventure.

Mackinaw Island was beautiful and my passengers had two days to walk around, shop, buy fudge, and ride in horse drawn carriages. We then returned to the mainland on the proper ship – not nearly as exciting as the tugboat. From here we crossed the Mackinaw bridge into northern Michigan and then headed south into Wisconsin. For the last night we were supposed to stay in a hotel in the town of Sheboygan. I noticed in the brochure that it mentioned a farewell banquet. So I phoned the hotel and asked them to set up a banquet for the coming evening. I announced to all my passengers (now friends and comrades in adventure) that I had scheduled a banquet and told them to dress up. By that time everyone knew each other well and we had become an amazingly cohesive group. The hotel put on a great banquet and all my new friends came in fancy dress. But what does one do at a banquet in additional to eating rich food? There must be some kind of entertainment. I was the tour guide so I took charge. I told them stories from Africa, I played a couple of simple songs on the piano and I even sang some love songs. My passengers loved it.

The following day we drove south into Chicago. I noticed in my briefcase a sheaf of papers – blank evaluation forms with a set of questions asking the passengers what they thought of their trip. There were some pointed questions. “How well was the trip organized? Did the tour guide know his job? Was the tour guide courteous? Would you recommend this trip to other people?” I figured I was dead and this was the end of my tour guide career. But I handed them out to everyone on the bus and they diligently filled them out. When the passengers disembarked at the Chicago terminal, they handed me the their completed papers. They also slipped money into my hand. Both my driver and myself were astounded by how much they tipped us. Many of them said it was the best (memorable) trip they had ever taken.

After the passengers left I was summoned to the tourist office. The manager jumped up and said, “Who are you? You are not trained to be a tour guide! We never hired you!” I had to admit I was not trained, but I pointed out that he was the one who thrust me onto the bus and gave me the greyhound briefcase. He had to admit it was his mistake. He had thought I was somebody else. I handed him the sheaf of evaluations. He sat down and started reading through them. Then he looked at me for a long time – making up his mind. With a wry smile he asked me “What are doing this week? There is a bus outside loaded with 31 passengers, but the tour guide just called in ill. They are waiting to take a seven-day trip to the Black hills.” He handed me another Greyhound briefcase and I found myself introducing myself to my new set of tourists. Then I got out the guidebook about North Dakota and started reading like crazy.

I worked for Greyhound for the next two summers. I was the guy they sent out when they needed somebody at the last minute. I seldom knew where I was going, but I guided tourists to over 40 states. I learned to be flexible and always brought my passengers into the decision making process. It was good training for my eventual work of leading educational safaris around Africa. Thank you Greyhound.