The Hook Brothers and the Silverbeck Hotel 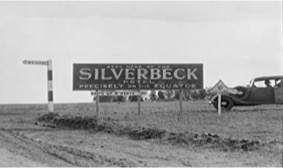 Logan Hook, tall and handsome, a submarine commander in the First World War, went to Kenya in 1921. He took his family to Nanyuki where for 15 years they lived in a grass house which cost them £15.00 to build. As they knew nothing about farming, they established the Silverbeck Hotel exactly on the Equator. It was built by two Sikhs in exchange for Logan’s motorbike and sidecar. The line of the Equator ran straight through its bar, enabling customers to quaff half their drinks in the northern hemisphere and half in the southern.  Twelve bandas, each with their own bathroom and outside loo were built for the guests, in a semicircle.  Bath water was carried in debes because there was no running water or indeed electric light.  In the middle of the semicircle was the main building, a grass-roofed bungalow with a wide veranda occupied by check-covered armchairs. Logan and his brother Raymond took safaris to collect rainbow and brown trout spawn to stock the rivers Burguret, Nanyuki, Ontelele and Sirimon. Logan also bought a farm five miles out of Nanyuki on the road to Timau.  His wife Fenella was an excellent pianist and indeed could have been a concert pianist had she not gone to Kenya. She opened a dress shop in Nanyuki called Madam Mabel, and ordered all her fabrics from London. They were made up by tailors Fernandez and d’Costa into beautiful clothes. During the Second World War Fenella was left on her own to run the hotel which accommodated and entertained many troops. There was sadness in 1944 when the Logans’ daughter Sonia was lost in the sinking of the Khedive Ismail off Trincomalee.

Logan’s strange belief was that the world would come to an end on a particular day. Despite this, every Sunday morning he would command a flotilla on the Burguret Estate dam, a sailing event which ended with a pink gin session. Logan’s brother Raymond, who lived nearby, was equally odd. This is what Elspeth Huxley said of him: “Tall, heavily built, tough as an old boot and with a voice as soft as a dove’s, his nature was a curious blend of the gypsy and the don. He lived like a pig, oblivious of squalor and inured to discomfort, yet could quote in the original Greek pages from Homer or Plato, and had made a study of Egyptian hieroglyphics. Off he would go up the mountain with the bag of posho, and another of beans, loaded on a mule, with a groundsheet for shelter and a thumbed copy of the Greek classic in his pocket, to disappear for weeks on end.”

Surprisingly, Raymond married and his wife Joan did her best to civilise him but with little success. After ten years of marriage both parted company and Joan, having tired of snakes under the kitchen stove, goats wandering in and out, and chickens nesting everywhere, lived in one end of the house with her twin daughters. While she ran the farm Logan made a living by shooting buffalo and selling their hides for £10. each. With this money he bought a herd of cattle. He also conducted safaris up Mount Kenya and sold animals to zoos.