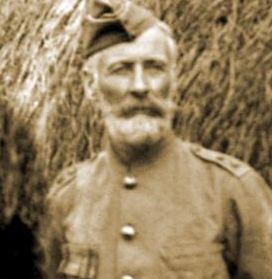 Francis Sandys Dugmore was born in Paddington, London, where he was baptised on 18 March 1839. He was the son of a barrister, William Dugmore, and his wife Mary Louisa. He was brought up in London and had three younger brothers and two younger sisters. He joined the army, serving in Canada in the Royal Canadian Rifle Regiment, and eventually reaching the rank of Captain in the 64th Regiment of Foot. He was prosperous enough to marry on 23 April 1867. His bride, the same age as himself, was a member of the aristocracy, the Hon. Emily Evelyn Brougham, daughter of the 2nd Baron Brougham and Vaux. The pair lived in Canada, where their first son, William, was born. Soon the family returned to Britain, where they settled at Dauddyffryn, in Merionethshire. Three more sons were born, Arthur, Wilfrid and Cyril, and a daughter, Louisa.

Dugmore spent long spells serving in Ireland, but got himself into trouble in 1882 and was imprisoned in Tullamore gaol, while on the army reserve list (he had retired from the army in July 1882). Apparently he had been inciting people not to pay rent. Questions were asked in Parliament and he was eventually released. At some stage he joined the Royal Navy, where he reached the rank of lieutenant (he appears in the Navy List from 1888 to 1898).

What happened to Dugmore’s marriage is uncertain, but in 1891 his wife was living in Guernsey on private means, with her two youngest sons. In 1894 Dugmore joined the party of Freelanders going to Lamu, whom I talked about in last month’s blog. He was a troublemaker who stayed in Africa after the venture was cancelled. Following the British government’s takeover of British East Africa in July 1895, Dugmore managed to get himself attached to the troops engaged in the attack on Mwele, calling himself a war correspondent and later, following a trip to Bombay, he was apparently given a minor position with the military at Mombasa.  In September 1896 he was put in charge of Sudanese troops at the Ngong stockade and although he was apparently always highly strung, now he was becoming increasingly difficult to deal with, possibly even mentally unstable. The British administrators Frank Hall and Edward Russell did not take to him at all, because he was decidedly strange.  Instead of walking a few paces to discuss matters face to face with his white colleagues, Dugmore would type them a lengthy letter signed ‘Mugdore Ye Looniac’ or ‘The Bloody Old Shit’.  He sent one lady an elephant foot as a delicacy for her table.  To counter fleas, he soaked his pyjamas in paraffin before going to bed, which brought him out in boils all over his body. And when his pet monkey got into some of his belongings he gave it a sound flogging. “What the natives can think of him I don’t know,” said a despairing Edward Russell.

The Sudanese troops complained to John Ainsworth, District Commissioner at Machakos, of what Ainsworth described as their ‘extraordinary treatment’ by Dugmore. When the Sudanese mutiny started in Uganda, Dugmore, much to everyone’s relief, decided to go and help because his son William was a lieutenant in the Uganda military. His position at Ngong was taken by a young man called William Cooke. Dugmore returned from Uganda in August 1898 and seems to have convinced himself that Cooke had stolen his job. By now there was no doubt that he was ill and after an examination by the local medical officer, Ainsworth ordered him to be brought to Machakos, escorted by Cooke and Edward Russell. On the journey Dugmore was apparently in good spirits and seemed glad to be going, but during a halt at Athi River camp he got into an argument with Cooke about the positioning of his tent, grabbed Cooke’s loaded rifle and shot and killed him. While awaiting trial for murder in Mombasa he managed to hang himself with a bootlace on 10 November 1898, leaving effects amounting to £60. TheZanzibar Gazette reported his death as being caused by apoplexy, and suicide was not mentioned. It was simply stated that his mind appeared to have been affected during his time in Uganda.

Dugmore is an example of the less than satisfactory personnel sometimes employed to guard the British empire overseas, men whose behaviour would not be tolerated at home. But his sons did well, the eldest becoming a professional soldier who was killed in the First World War in 1917, while another was an accomplished photographer, and one became an athlete. Dugmore’s wife died on 13 November 1919.