The Mystery of Olive Grey, Editor of Kenya’s First Newspaper 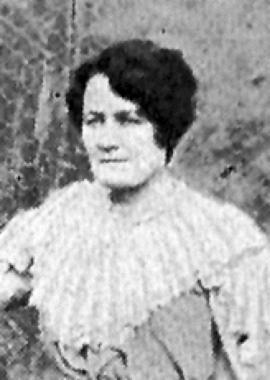 Olive Grey is a woman of mystery who led an unusual life, and it has been fascinating finding out about her. She was born Matilda Elizabeth Gainey in December 1855, in Tamworth, NSW, Australia, the daughter of Humphrey Sylvester Gainey and Mary Thorpe. She was baptised as a Roman Catholic in West Maitland, New South Wales. She married William Dickson in 1877 and had a daughter Violet May in 1884. She became a missionary in India, and some of her letters are in the Coral Missionary Magazine in 1878 (pages 28, 77 and 122). She returned to Australia and took over the care of one of her sister Honoria’s step-children (there were ten of them) He was Ernest William Griffin (born on 23 January 1875), and she took him back to India with her in 1879 or 1880. But her daughter Violet did not seem to accompany them. It is not clear whether her husband died or when she assumed the name Olive Grey. Did she marry someone called Grey?

Ernest (who was calling himself Grey rather than Griffin at this stage) returned to Australia and got married in 1895 – to May Ellen Murray, in Sydney. But the marriage was not a success (it was eventually dissolved in 1902) and Ernest went to East Africa, to join Olive. He was there in 1899, whereas we know Olive was there in 1895, working as a ‘typewriter’. By 1897 she was with the missionary Stuart Watt in Machakos. Now there appears another man in her life – Charles Palmer, an Anglo-Indian. It is not known if Olive and Charles were married, but they lived together. Charles had arrived in East Africa in February 1892, working for the Imperial East Africa Company customs and shipping department. When the British government took over IBEA he continued to work for the government, as assistant customs collector and deputy governor of Mombasa prison (1898). Apparently he was sacked and we find him cutting timber for the Uganda Railway in 1901. The following year he started up the firm of Palmer & Grey with Ernest Grey, who had returned to India and married again – to Eunice Adelaide Powell, in Bombay, in 1902. Then back came Ernest to East Africa and resumed the surname Griffin; he worked as an auctioneer in Mombasa and he and his wife had a daughter in Mombasa in 1904 – Ethel Gladys. Eventually they were to have six children. Ernest was joined by his father William Griffin in 1905 and brother Sydney Gordon Griffin, who worked for the East Africa Syndicate and lived at Naivasha, in 1904.

Olive and Charles decided to start the first East African weekly newspaper in 1899 in Mombasa – the East Africa and Uganda Mail. It is sometimes said that the Taveta Chronicle was East Africa’s first newspaper, but in fact it was really a parish magazine, produced only intermittently. Olive was the Editor of the East Africa and Uganda Mailand she proved to have an acerbic pen. Some members of the European community took against her – she ‘lives with a black man’, said Frederick Jackson, referring to Palmer’s Anglo-Indian heritage. ‘I believe Palmer & Grey … were a couple of bad eggs’, said McGregor-Ross. While in India in Karachi Olive had dressed as an Indian lady and was known by the name Gaunapoo. Palmer also crossed the powerful Indian businessman A.M. Jeevanjee, becoming a rival for him on a railway oil contract. Olive used the Mail to castigate Jeevanjee, and so provoked him that in 1901 he started his own newspaper, the Standard, which morphed into the East African Standard. The Standard won a case of libel against the Mail, and soon it began to outsell the original newspaper.  Finally, in 1904 the Mailwas declared bankrupt and ceased publication.

This was the second time Olive was bankrupt in East Africa – the first was in 1901. She returned to India with Charles, probably in 1905. She wrote a novel under the name Olive Grey entitled The Van Tit Willow Tribe, or the Vagaries of an Irresponsible Editor (Mombasa, Palmer & Grey, 1903). The Phenomenal Rise of the Rat is another book she wrote. Ernest probably went to India at the same time (he was there in 1906), while his father and half-brother returned to Australia by 1910. Ernest went back to Australia post-1910 and resumed the surname Griffin. He became a bookkeeper, mail officer and photographer and served in World War I, taking part in the Gallipoli landings. He died in Redfern, Sydney, on 20 January 1931. ‘Gulligimbi’, the home built by his father William, is still standing north of Jackson in Western Queensland. We don’t know when or where Olive died, but she was alive in India in 1914, living in Warangal, Deccan.