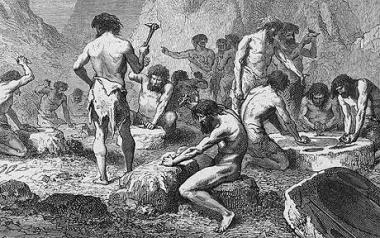 I am pleased to say that reactions to my blogging efforts have been favourable but I have noticed an undertone of veiled criticism in so much as the average reader of Old Africa is naturally interested in the period of African history when European discoveries and settlements began, when great-great-granny from Guildford jumped ship in Mombasa and helped Captain Owen haul up the Jack.

On the other hand I am more conversant with what has occurred since I arrived on the scene in the mid-fifties at a time when many of the real pioneering settlers were departing. I have therefore devised an idea to solve my little problem. I have chosen for my topic a time in East Africa before even the Nilotic lot had wandered down the shores of the Nile and before the Zinj lot started hunting and gathering North of the Zambezi.

Although I have only driven the Turkana Bus on thirteen occasions, I have been responsible for over 30,000 people having taken the Safari and I have spoken to 99% of them immediately before they departed and immediately after they returned. I have noticed that the ambience of the southeastern Lake Turkana area seems to have quite an effect on most of them. Their feelings are best described as an affinity with the infinite. Therefore, I wanted to devote this blog to two questions connected with early man – the one being spiritual and ethereal, the other factual and material.

I soon discovered the human brain – or at least my brain – has not yet developed to a state where it can comprehend the questions I was going to ask. Because this area of the world experienced two mutations in human endeavour, I was speculating on a third. The first event is that Australopithecus evolved to Homo erectus around two million years ago. The second amazing event is that from the Eastern shores of Lake Turkana human men and women set off on that great journey of discovery to populate the world. As recently as the last decade this has been proven by the tracing of specimens of DNA from all over the world and finding that they originate from a tiny group of people from Eastern Turkana.

I was therefore going to ask in my question whether it was possible that it was at this place that the spirit, which some men call the soul, entered in. Definitions and profound assumptions soon clouded my judgement and my thought process became bogged down, so I was left with the second of my questions, the material and factual one.

Stone-age man of Olorgesailie half a million years ago set up a hand axe factory. Much research is still going on, especially by the Smithsonian Institute. They have found no evidence of bodies – fossilized or otherwise – being found in any grave adjacent to the hand axe site. The question is why did these Stone-age men reside in areas thirty kilometres or more from their place of work, particularly as no traces of buses or bicycles have been found?!

Another investigation team was mystified that some of the hand axes were manufactured not from rocks near at hand but from rocks even further away from their homesteads. There seems no logic in carrying stones all that distance and then beginning to chip them.

When I visited Olorgesailie on the Magadi road, I wondered why there was apparently so much over-production. The people for whom the factory would cater were presumably those who resided within reasonable walking distance of the site, a hundred miles or so from all directions. In view of the scant population of those days this could not be a very large amount of customers. Of these a half were female and would have no need for a hand axe and neither would the children, so we are only looking at a few hundred who required a hand axe. With sharpening a hand axe would last for more than a generation. In view of this why did the Stone-age axe makers manufacture such vast supplies, stocks that would last for generations? Stroll through the hundreds of piles of stone axes each pile containing a hundred axes and many many more strewn around the site. My question, I repeat, is: Why were such large stocks kept?